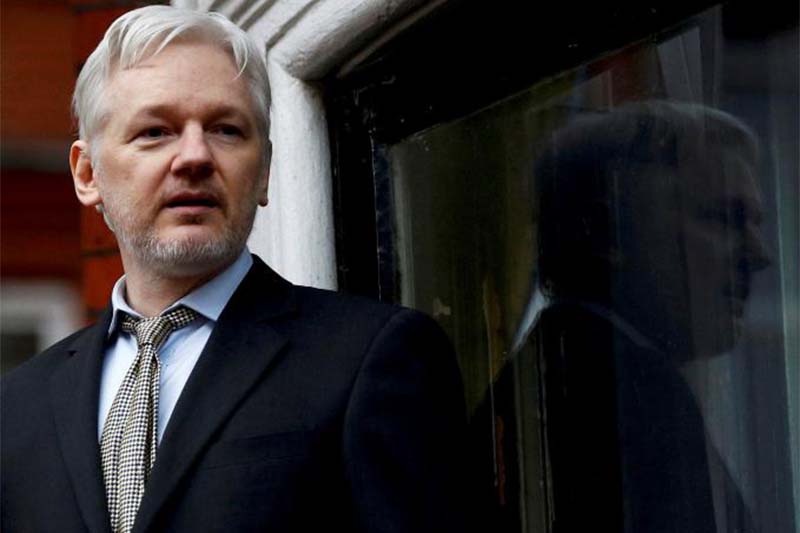 WikiLeaks founder Julian Assange makes a speech from the balcony of the Ecuadorian Embassy, in central London, Britain, on February 5, 2016. Photo: Reuters/File
STOCKHOLM: Julian Assange's lawyer has requested a Swedish court rescind a detention order against the WikiLeaks founder over an alleged rape and allow him to go to Ecuador to be safe from extradition to the United States. Assange, 45, has been holed up in the Ecuadorean Embassy in London since 2012, after taking refuge there to avoid extradition to Sweden over allegations of rape, which he denies. He fears Sweden would in turn hand him over to the United States to face prosecution over WikiLeaks' publication of thousands of classified military and diplomatic documents in one of the largest information leaks in US history. Lawyer Per Samuelson said the United States had now openly said it wants to arrest Assange. "Given that the US is obviously hunting him now, he has to make use of his political asylum and it is Sweden's duty to make sure that Sweden is no longer a reason for that fact he has to stay in the embassy," Samuelson said. "If they rescind the detention order, there is a possibility he can go to Ecuador and then he can use political asylum in an entire country." CIA Director Mike Pompeo last month called WikiLeaks a "hostile intelligence service", and Attorney General Jeff Sessions, responding to a question about Assange, said the administration was stepping up its efforts against all leaks of sensitive information. "Whenever a case can be made, we will seek to put some people in jail," Sessions said. Samuelson said Sweden's Supreme Court had previously rejected a similar request for the detention order to be torn up on the grounds that there was little chance that Assange would be handed over to the United States. "With the Supreme Court's own reasoning, his detention should now be rescinded because we can now prove that the US is hunting Julian Assange," he said. He said it was unreasonable to demand that he should give up the 100 percent security of political asylum in Ecuador in exchange for the lower protection given by Swedish rules on extradition to the United States. Samuelson said he expected the High Court to consider the request in the next few weeks. Assange was questioned in November in Ecuador's London embassy over the alleged rape, and Sweden is now considering whether to proceed with its preliminary investigation. The offence is alleged to have occurred in 2010. Samuelson said Swedish prosecutors would still be able to pursue their investigation against Assange even were he to be allowed to go to Ecuador. "If they want to charge him and go to trial, that can happen just as well with him at liberty in Ecuador since that's the only place he can be," Samuelson said. "It does not mean there would be any disadvantage to Sweden."
#United States #Sweden #Ecuador #London #WikiLeaks #Julian Assange #extradition #Ecuadorean Embassy #Swedish court #detention order #alleged rape #information leak
You May Also like: