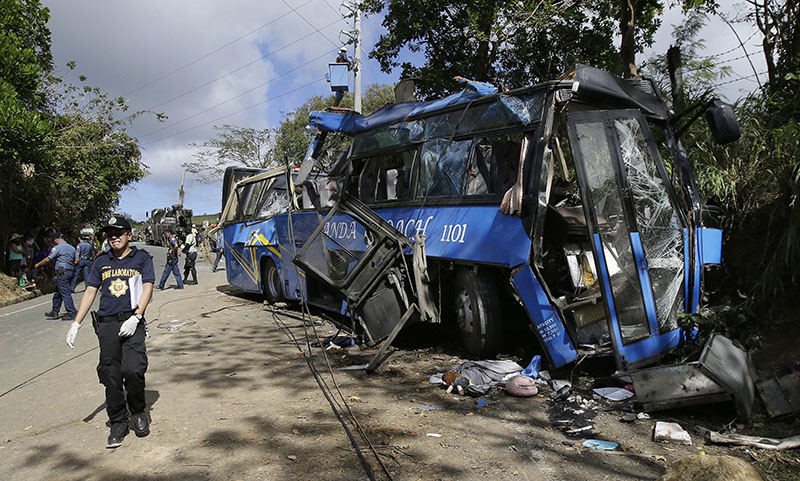 A police investigator passes by the wreckage of a bus that crashed on a downhill road in Tanay, Rizal province, east of Manila, Philippines, on Monday, February 20, 2017. Photo: AP
TANAY: At least 14 people, most of them college students on a camping trip, were killed Monday when their rented bus lost its brakes on a downhill road then slammed into an electric post, Philippine officials said. Ten of the victims were killed on the spot and four others died in two hospitals following the accident in the hilly town of Tanay in Rizal province east of Manila, Tanay disaster-response officer Darlito Bati Jr. said. More than 40 others, including the driver, were injured and taken to hospitals, with several of them in critical condition, Tanay officials said. Bati, who was among those who helped pull the victims from the bus wreckage, said many of the dead were piled in a heap of bodies in front of the passenger cabin. The impact was so strong it ripped off a large chunk of the roof of the bus and scattered around the victims' belongings. Garbage truck driver Danny Gutierrez said some of the survivors wept, while others suffering from broken legs and cuts were too shocked to speak. "The bus is a total wreck," Bati said by telephone. The bus was in a convoy of several vehicles transporting hundreds of college students to a camping resort the accident happened 50 kilometers (30 miles) east of Manila.
#Philippines #Philippines bus crash
You May Also like: