At least 7 militants killed in Pak 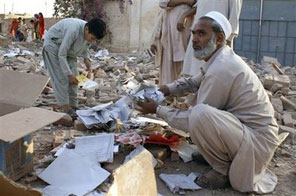 A man collects torn books at the site of a damaged girls high school, wrecked by suspected militants on early morning on Sunday, Nov. 1, 2009 in Karigar Garhi village near Bara, the main town of Pakistan's troubled tribal region Khyber along Afghan border. Militants are targeting mostly girls schools as they are against females' education. Source: AP

ISLAMABAD: Security forces battling pockets of resistance in a Taliban stronghold in a mountainous tribal region killed at least seven militants Sunday and injured several more, officials said.
The fighting took place in the village of Kaniguram, which Pakistan attacked during its two-week-old offensive in South Waziristan, one of the semi-autonomous tribal regions where the Taliban has grown in power in recent years.
The officials, from Pakistan's intelligence branches and the paramilitary Frontier Corps, spoke on condition of anonymity because they were not authorized to speak with the media.
While Pakistan aided in the rise of the Afghan Taliban in the 1990s, it has become increasingly destabilized in recent years by the growth of its own militant Taliban network.
The Taliban including fighters from Afghanistan, Pakistan and places like Uzbekistan, Chechnya and the Arab world have long taken refuge in the undeveloped, desperately rugged and mountainous tribal regions along the Pakistan-Afghanistan border, where they can often operate openly. Osama bin Laden and many of his top al-Qaida aides are also thought to be in hiding along the border.
Pakistan launched its offensive in mid-October in order to drive out the militants, though it remains unclear what Islamabad plans to do once it has taken military control of the region. The government has never had much authority in the tribal areas, which used to fall under the control of tribal elders but which has become increasingly lawless as the militants killed traditional leaders during their own rise to power.

#At least 7 militants killed in Pak
You May Also like: