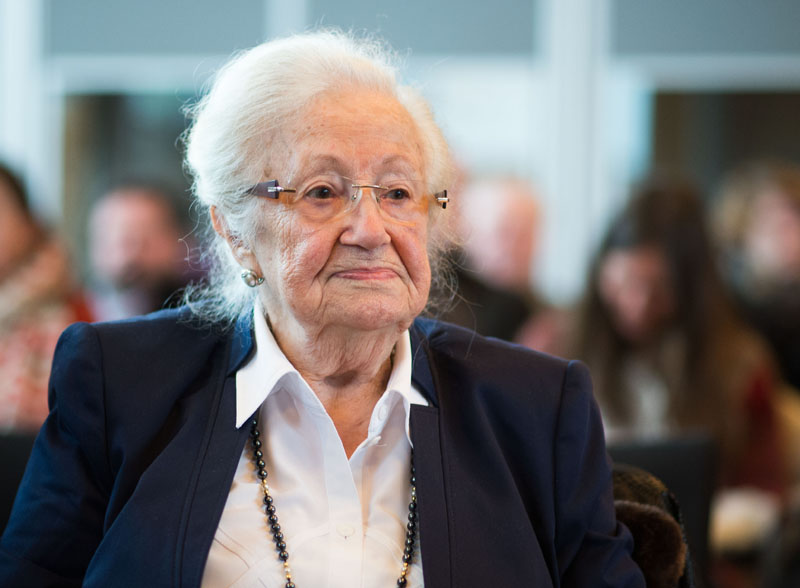 Auschwitz survivor Erna de Vries arrives at the court in Detmold, Germany, on Friday February 12, 2016. Photo: Bernd Thissen/Pool Photo via AP
DETMOLD: Three Holocaust survivors testified Friday about the horrors they experienced at the Auschwitz the death camp, on the second day of the trial of a former SS sergeant on 170,000 counts of accessory to murder. Reinhold Hanning, 94, sat only a few meters (yards) from the witnesses, but showed no emotion as they told of crematoria chimneys belching flames, naked prisoners being taken to the gas chambers, and seeing people being shot. Prosecutors say Hanning told them that he was a guard at Auschwitz but denied taking part in any executions. Justin Sonder, the youngest of the witnesses at 90, arrived at Auschwitz at age 17 and was selected to be a slave laborer for the IG Farben company, rather than sent directly to the gas chambers. He told the court that after three or four months, he was considered one of the "older" prisoners and feared most selection days, when SS men would look at rows of inmates, who were forced to stand in a line naked for up to four hours, and decide who was still fit to work and who should be killed. "I don't have the words to describe how it was, when you know that you could be dead in one or two hours, it made you sick, made you crazy," he said, his voice trembling with emotion. "I survived 17 selections," added Sonder, a retired police officer from Chemnitz, who lost 22 family members in the Holocaust. Hanning is accused of serving as an SS Unterscharfuehrer (junior squad leader) in Auschwitz from January 1943 to June 1944, a time when hundreds of thousands of Hungarian Jews were brought to the camp in cattle cars and gassed to death. Hanning, a retired dairy operator, admitted to investigators when first questioned that he had served in the Auschwitz I part of the camp in Nazi-occupied Poland, but denied serving at the Auschwitz II-Birkenau section, where most of the 1.1 million victims were killed. Prosecutors argue that he is guilty of accessory to murder because he helped the death camp complex function, even though there is no evidence of him committing a specific crime. Trial sessions are limited in deference to Hanning's health and a doctor is on hand throughout, but he seems in good condition for his age, walking in and out of the court without the help of a cane and listening attentively throughout. He has spoken only one word so far, however, telling presiding judge Anke Grudda on Friday when she asked how he was after the first day of trial that he was "good." His attorney, Andreas Scharmer told The Associated Press that it was "highly likely" that his client would make a statement during the proceedings, but he would not say how detailed it might be nor when. Sonder said he looked forward to hearing what Hanning had to say. "Perhaps he will try to explain — it would be good if he did," Sonder told the AP after the session. "I hope he finds the courage to say something." Survivor Erna de Vries, whose father was not Jewish, told the court when the Nazis came for her Jewish mother in 1943 she did not have to go with her to Auschwitz but chose to stay with her. She was in Auschwitz for only two months when the SS took her and about 85 other half-Jews to the women's concentration camp Ravensbrueck. "That was one of the worst days of my life when I was sent to Ravensbrueck and my mother stayed in Auschwitz," she said. "I never saw her again." She said that her mother had been happy to hear that she was going to Ravensbrueck, knowing that any place was better than Auschwitz. "Auschwitz was a death camp, and she had the hope it would get better for me," she said. Leon Schwarzbaum, a 94-year-old Auschwitz survivor from Berlin who was used as slave laborer to help build a factory for Siemens outside the camp, said he could not see the area with the gas chambers and crematoria from where he was kept, but that everyone knew exactly what was going on there. "We saw the fire from the chimneys," he told the court. "So much fire came out of the chimneys, no smoke, just fire. And that was burning people." The three are among about 40 survivors and their families who have joined the trial as co-plaintiffs, as allowed under German law. Not all will testify, but the trial is scheduled to hear three more when testimony resumes next Thursday, and two more on Friday.
#Germany #Jewish #Holocaust survivors #Auschwitz Trial #Reinhold Hanning #Auschwitz the death camp #crematoria chimneys belching flames #naked prisoners #Justin Sonder #IG Farben company #gas chambers #SS Unterscharfuehrer (junior squad leader) #Auschwitz II-Birkenau section
You May Also like: