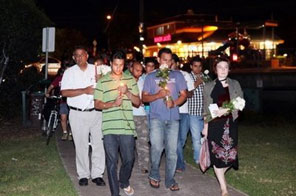 People take part in a candle light vigil in the western suburbs of Melbourne where Indian student Nitin Garg was fatally stabbed. Australia on Monday "unreservedly" condemned the murder of the Indian national as New Delhi angrily slammed the attack and warned it could hurt bilateral ties. Source: AFP

MELBOURNE: Australia on Monday "unreservedly" condemned the murder of an Indian national as New Delhi angrily slammed the attack and warned it could hurt bilateral ties.

She was speaking after India decried the murder as a "crime on humanity" and said it would "certainly" affect ties between the two countries.

"It certainly will have some bearing on the bilateral ties between our two countries," he added.

Police have said there is no evidence the murder was racially motivated, but also told AFP that 1,447 people of Indian descent were crime victims in Victoria state in the 12 months to July 2008.

Gautam Gupta, president of the Federation of Indian Students of Australia, said many more attacks went unreported and questioned why police were playing down race as a factor.

"If they have not caught the criminal, how can they eliminate racism as being behind this attack," Gupta told AFP. "What were they expecting to find on the scene? A business card saying: 'I am a racist'?"

According to his housemate Parminder Singh, Garg, understood to be from Punjab in northern India, had been targeted by drunken louts at a train station in an earlier incident.

"They were just drunk and they wanted to find anyone to beat," Singh said.

"If they find someone alone they just beat (them) because they know nothing is going to happen after that. What will happen? Police will not do anything."

Australia has forecast a 20 percent drop in students from India next year after earlier attacks prompted a barrage of negative publicity in the country.

Each allegedly racial attack sparks outrage on India's passionate TV news channels, amid rising concern from families and friends of students studying in the country that was previously seen as a safe and even glamorous destination.

But deputy police commissioner Kieran Walshe said Victoria had a large Indian population and he did not believe the community was being singled out.

"I don't believe that there has been any really detailed rascist motives around assaults on Indian people in the past," he told reporters.

"In some cases there may well be. But in the general sense of it, a lot it we've seen has been around opportunistic theft."

Australia attracted some 117,000 Indian students in the year to October, about 19 percent of foreign enrolments as universities and colleges actively target the country's growing middle class.

Australia's education sector has also been tarnished by a series of visa scams involving agents who exploit foreign students.