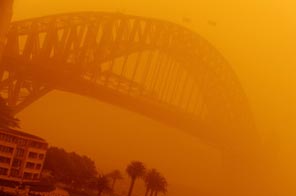 The Sydney Harbour Bridge is shrouded in an eerie blanket of dust on September 23, 2009. Sydney's cars and buildings turned orange as strong winds blew desert dust across the city, snarling commuter and air transport and prompting a warning for children and the elderly to stay indoors. Source: AFP

SYDNEY: Australia's biggest city was shrouded in an eerie blanket of red dust on Wednesday as bushfires, earthquakes, high winds and massive hail stones caused havoc in the country.

Sydney's cars and buildings turned orange as strong winds blew desert dust across the city, snarling commuter and air transport and prompting a warning for children and the elderly to stay indoors.

Residents wore face masks and covered their mouths with scarves as they travelled to work under hazy skies. Traffic was bumper-to-bumper on major highways.

Sydney airport warned of severe disruption throughout the day in the unusual conditions, as flag-carrier Qantas diverted incoming international flights to Melbourne and Brisbane.

"We encourage any passengers with non-essential travel arrangements to reconsider their travel plans for the day," Qantas said in a statement.

Australia, in the grip of a decade-long drought, is emerging from an abnormally hot southern hemisphere winter including the hottest August on record.

The meteorology bureau issued a severe weather warning of "widespread damaging winds" in Sydney and other areas, as gusts of 65 kilometres (40 miles) per hour hit the city.

"We have already seen an increase in calls to people suffering from asthma and other respiratory problems," New South Wales Ambulance Service said in a statement.

"People with asthma in particular need to be aware of early warning signs, especially if their condition does not respond to their usual medication."

"We've had reports of cars with both their front and rear windscreens smashed," an official from the State Emergency Service said.

Further north, Queensland imposed a ban on lighting fires across large parts of the state a day after a dozen bush blazes sprang up following a spell of hot, dry weather.

Victoria state was on alert for flash floods as heavy rains fell, following a pair of minor earthquakes late on Tuesday. The 3.0- and 2.6-magnitude tremors did not cause any damage, officials said.

"I've never seen anything like it in all my life, and I grew up here," a police officer at the town of Broken Hill told national news agency AAP.

"It was darker than night-time, and lasted for about half an hour. You couldn't even see the street lights."

#Australia reels from wild weather
You May Also like: