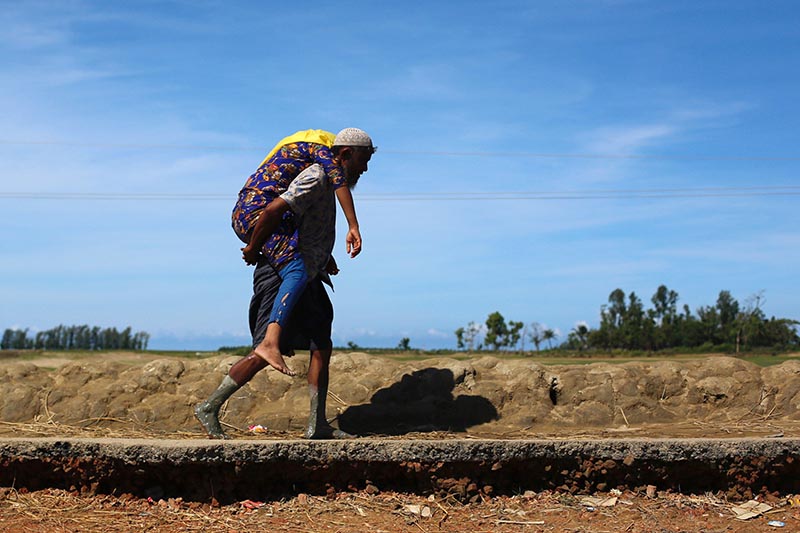 A Rohingya refugee man carries a woman after crossing the Bangladesh-Myanmar border by boat through the Bay of Bengal in Shah Porir Dwip, Bangladesh, on September 15, 2017. Photo: Reuters
DHAKA: Bangladesh has accused Myanmar of repeatedly violating its air space and warned that any more "provocative acts" could have "unwarranted consequences", raising the possibility of a deterioration in relations already strained by a refugee crisis. Nearly 400,000 Rohingya Muslims from western Myanmar have crossed into Bangladesh since August 25, fleeing a Myanmar government offensive against insurgents that the United Nations has branded a "textbook example of ethnic cleansing". Bangladesh said Myanmar drones and helicopters had violated its air space three times - on September 10, 12 and 14 - and it had called in a top Myanmar embassy official in Dhaka to complain. "Bangladesh expressed deep concern at the repetition of such acts of provocation and demanded that Myanmar takes immediate measures to ensure that such violation of sovereignty does not occur again," the ministry said in statement late on Friday. "These provocative acts may lead to unwarranted consequences." A Myanmar government spokesman said he did not have information about the incidents Bangladesh had complained about but Myanmar had denied an earlier accusation. The spokesman, Zaw Htay, said Myanmar would check any information that Bangladesh provided. "At this time, our two countries are facing the refugee crisis. We need to collaborate with good understanding," Zaw Htay told Reuters. Bangladesh has for decades faced influxes of Rohingya fleeing persecution in Buddhist-majority Myanmar, where the Rohingya are regarded as illegal migrants and denied citizenship. Bangladesh was already home to 400,000 Rohingya before the latest crisis erupted on August 25, when Rohingya insurgents attacked about 30 police posts and an army camp, killing a dozen people. The Myanmar security forces responded with what rights monitors and fleeing Rohingya say is a campaign of violence and arson aimed at driving out the Muslim population. HUMANITARIAN CRISIS UN Secretary-General Antonio Guterres and the UN Security Council have urged Myanmar to end the violence, which he said was best described as ethnic cleansing. Myanmar rejects the accusations, saying its security forces are carrying out clearance operations to defend against the insurgents of the Arakan Rohingya Salvation Army (ARSA), which claimed responsibility for the Aug. 25 attacks and similar, though smaller, attacks in October. The government has declared ARSA a terrorist organisation and accused it of setting the fires and attacking civilians. About 30,000 non-Muslim villagers have also been displaced in the conflict in which Myanmar says more than 430 people have been killed, most of them insurgents. Nearly half of 471 villages in the north of its Rakhine State had been completely deserted or partly abandoned, the government said. The ARSA has denied links to foreign Islamists and has called for neighbouring countries to block any foreign "terrorists" from trying to join it. It says it is fighting for the rights of Rohingya. The conflict has led to a humanitarian crisis on both sides of the border and raised questions about Myanmar's transition under the leadership of Nobel laureate Aung San Suu Kyi after nearly 50 years of strict military rule. The generals still control national security policy but nevertheless, Suu Kyi has been widely criticised abroad for not stopping or condemning the violence. There is little sympathy for Rohingya in a country where the end of military rule has unleashed some old communal animosities and the military campaign in Rakhine State is generally supported. Ethnic cleansing is not recognised as a separate crime under international law but allegations of ethnic cleansing as part of wider, systematic human rights violations have been heard in international courts. Rights group Amnesty International said on Friday evidence pointed to a "mass-scale scorched-earth campaign" across the north of Rakhine that was unmistakably ethnic cleansing.
#Bangladesh #United Nations #myanmar #Refugee crisis #Rohingya Muslims #Arakan Rohingya Salvation Army #ARSA #western Myanmar
You May Also like: