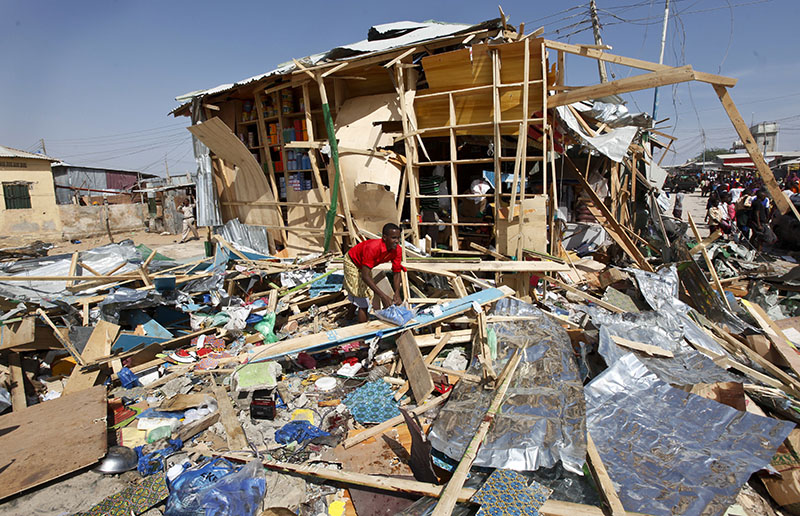 A shopkeeper surveys the wreckage of shops destroyed by a blast in a market in the capital Mogadishu, Somalia, on Sunday, Feb. 19, 2017. Photo: AP
MOGADISHU: A car bomb at a marketplace in Somalia's capital has killed at least 20 people and injured 50 others, said a local Somali official.
The blast by a car bomb parked near a restaurant went off at a busy time when shoppers and traders were gathered inside the market, said district commissioner Ahmed Abdulle. Mohamed Haji, a butcher who suffered shrapnel wounds, pointed to a clothes shop devastated by the blast. "Someone had parked the car here and left before it was detonated," he said. Pieces of wood and metal sheets on the ground were all that remained of the shop. Women sobbed and screamed outside the market as rescue workers moved bloodied bodies and wounded victims into ambulances. "It's a painful carnage." said Ali Mire, a government soldier who was helping a friend with shrapnel wounds The powerful explosion was the first major attack since Somalia's new president was elected on Feb.8. Although no group has yet claimed responsibility, it bears the hallmarks of Somalia's Islamic extremists rebels, al-Shabab. In a Twitter post, President Mohamed Abdullahi Mohamed condemned the blast, saying that it shows the "cruelty" of al-Shabab. A few hours before the blast, al-Shabab denounced the new president as an "apostate" and vowed to continue fighting against his government. Italian Foreign Minister Angelino Alfano, in a statement condemning the attack, said that "Italy remains solidly on Somalia's side in the process of the country's stabilization." He added that "together we will act so that the terrorists don't succeed in stopping the path of peace and reconciliation that is underway."