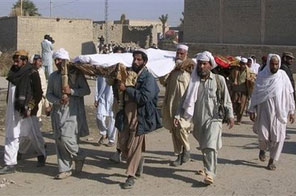 The blast came two days after a suicide car bomber attacked a sports event near a meeting of tribesmen who supervise an anti-Taliban militia near Pakistan's South Waziristan tribal area, killing almost 100 people.

The group of six elders attacked Sunday were working to set up a similar militia in the Bajur tribal area, a militant stronghold near the Afghan border, said local official Naseeb Shah. Two were killed and the others were critically wounded, he said.

The men were on their way to meet local officials in the main town of Khar when the remote-controlled device detonated, Shah said. The blast occurred near Kassai, about 17 miles (28 kilometers) northeast of Khar, he said.

The Pakistani military carried out an anti-Taliban offensive in Bajur in 2008 and 2009 that it declared a success. But the militants have maintained their presence, and violence has flared in the region since then.

The bullet-riddled bodies of a man and a woman were found in the Mamund area of Bajur on Sunday with a note saying they were guilty of violating Islamic law, local official Faromosh Khan said.

The military also launched a major ground offensive in mid-October in South Waziristan, the Pakistani Taliban's main stronghold in the country. Many militants fled to escape the fighting and have responded with a wave of retaliatory attacks that have killed more than 600 people.

The suicide car bombing in the northwest village of Shah Hasan Khel near South Waziristan that killed 96 people on New Year's Day was one of the deadliest attacks since the army launched its recent offensive.

Police believe the attacker meant to detonate his 550 pounds (250 kilograms) of explosives at the meeting of anti-Taliban tribesman. Instead, the blast went off at a nearby outdoor volleyball court, leveling some three dozen mud-brick homes and covering the village in Lakki Marwat district with dust, smoke and the smell of burning flesh.

Ameer Haider Khan Hoti, the chief minister of Northwest Frontier Province, where Lakki Marwat is located, said recent military operations had put militants on the defensive and they were lashing out.

"They are running and they are targeting citizens," Hoti told reporters after visiting victims of the bombing being treated at a hospital in the provincial capital of Peshawar.

"Militants and militancy is a cancer, and our struggle against it will continue until it vanishes completely," he said.

None of the elders meeting at the time of Friday's attack were killed, and they insisted residents will keep defying the Taliban.

Across Pakistan's northwest, where the police force is thin, underpaid and under-equipped, various villages and tribes have taken security into their own hands over the past two years by setting up citizen militias to fend off the Taliban.

The government has encouraged such "lashkars," and in some areas they have proven key to reducing militant activity. The militias helped turn the tide against militants when the army conducted its offensive in Bajur.

Pakistani tribal leaders who face off with the militants do so at grave personal risk. Several suicide attacks have targeted meetings of anti-Taliban elders, and militants often go after individuals.

#Bomb kills 2 in NW Pakistan
You May Also like: