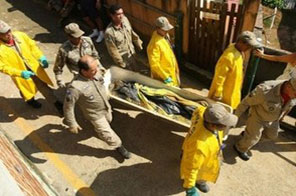 Rescue workers recover the body of a landslide victim in Praia do Bananal, Ilha Grande, southwest of Rio de Janeiro, Brazil, on January 2. Two nuclear plants close to a southern Brazilian town hit by landslides may shut down as a precaution, the mayor said, as the regional toll from deadly floods rose to 68. Source: AFP

ANGRA DOS REIS: Two nuclear plants close to a southern Brazilian town hit by landslides may shut down as a precaution, the mayor said, as the regional toll from deadly floods rose to 68.

"There are no operational problems at Angra I and Angra II... but if landslides persist in the hills, we'll need to shut them down," Mayor Tuca Jordao told a press conference in this seaside town some 150 kilometers (93 miles) south of Rio de Janeiro.

The mudslides were triggered by incessant rains that have killed at least 68 people across Rio de Janeiro state since Wednesday and left dozens missing. More than 4,000 people have had to evacuate their homes, Civil Defense officials said.

Rescue crews Sunday continued to search for victims among the mud and rubble at the Hotel Sankay, which catered to Brazilian and foreign tourists seeking a remote beachside hideaway. Some 40 guests were staying at the hotel when the landslide hit.

It is still not known if there were foreigners among the dead.

Some 200 firefighters and rescue workers were digging in the worst affected areas, hoping to unearth survivors, but hopes were fading fast.

Mayor Jordao said he has requested the two nuclear plants be shut down warning that in case of a catastrophe there was no way to quickly evacuate the city's more than 35,000 inhabitants, since the main road leading out is partly blocked by landslides.

The plants' closure would not affect electricity supplies to Rio de Janeiro, which has alternative power sources, the company running the plants said.

"This summer (in the southern hemisphere), high rainfall levels have been forecast. To the people of Angra dos Reis: please, at the slightest sign of rain" abandon your homes, he said.

Local authorities said around 500 houses in high-risk areas have been condemned or declared out of bounds in the city.

The Angra neighborhood of Vila Velha has been cut off from the rest of the city for three days, as landslides left it without power, running water and roads, Agencia Brasil said.

The only way to get to Vilha Velha, it added, is by boat.

Although the rains stopped on Friday, authorities put Rio de Janeiro on alert because of fears of potentially devastating mudslides in its densely populated hillside favelas, or shanty towns.

"You don't play around with nature. Our problem is the rain and you can't live like that, clinging to the hillsides," Rio state Governor Sergio Cabral said when he visited the disaster areas.

#Brazil nuclear plants may close
You May Also like: