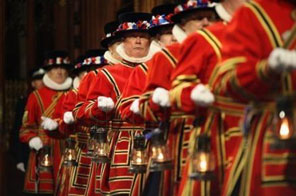 The ceremony dates back to the 16th century Source: AFP

LONDON: British Prime Minister Gordon Brown unveiled a crackdown on the banking industry on Wednesday as part of a voter-friendly agenda designed to boost his party's chances at elections barely six months away.
In a traditional Queen's Speech detailing its final legislative plans before ballots due by June, the government also put boosting growth and jobs as its top priority as Britain emerges from the global slowdown.
Brown's Labour party, which has been in power since 1997, looks set to suffer a heavy defeat to the main opposition Conservatives in the election and will hope the new measures can counter accusations it has run out of steam.
In addition to the economic plans, the government set out new guarantees on personal care for the elderly and for school pupils, and new laws to support carbon capture and storage and to ban cluster bombs.
Queen Elizabeth II outlined the government's programme in her annual Queen's Speech to parliament, in a ceremony full of pomp and tradition dating back at least to the 16th century.
"My government's overriding priority is to ensure sustained growth to deliver a fair and prosperous economy for families and businesses, as the British economy recovers from the global economic downturn," she said.
"Through active employment and training programmes, restructuring the financial sector, strengthening the national infrastructure and providing responsible investment, my government will foster growth and employment."
The government's plans included a new law to entrench its promises to halve the budget deficit in four years, while another proposed bill would empower the financial watchdog to intervene in bankers' contracts.
The Financial Services Authority (FSA) would be able to tear up pay deals if they are considered to promote risky behaviour, which was widely blamed for exacerbating the global financial crisis.
Full details of the plans are not expected until finance minister Alistair Darling unveils his pre-Budget report on December 9.
The government has only a few months to push through the 14 bills announced Wednesday before parliament is dissolved ahead of the next election, but ministers insisted it was a realistic and serious set of proposals.
"This is about governing, it's not about electioneering," Business Secretary Peter Mandelson, Brown's de facto deputy, told BBC radio ahead of the speech, adding that it was up to voters to decide whether the plans were achievable.
The Queen's Speech is a state occasion defined by traditions dating back more than 350 years.
Every year, the monarch travels in a royal carriage and with a cavalry escort from Buckingham Palace to parliament, where she dons ceremonial robes and a glittering crown before taking to the throne in the House of Lords.
An official known as Black Rod is then sent to summon elected lawmakers from the House of Commons to the Lords chamber to hear the queen, as no monarch has been allowed in the Commons since the English civil war.
The door is initially slammed in his face -- another reminder of the independence of the Commons -- before lawmakers follow him back to gather with the peers in their ermine robes to hear the speech.

#Brit PM unveils final poll plans
You May Also like: