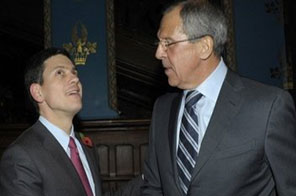 Russian Foreign Minister Sergey Lavrov (R) shakes hands with Britain's Foreign Secretary David Miliband during their meeting in Moscow on November 1. Miliband is in Russia seeking to improve relations plunged back to a Cold War chill by a series of bitter rows. Source: AFP

MOSCOW: David Miliband was Monday making the first visit by a British foreign secretary to Russia for five years, seeking to improve relations plunged back to a Cold War chill by a series of bitter rows.
Shortly after arriving late Sunday, Miliband met with his Russian counterpart Sergei Lavrov, with more talks to follow Monday, the British embassy said. He was also due to meet business and civil society leaders.
Miliband's trip to Moscow coincides with the third anniversary of the fatal poisoning in London of former spy turned Kremlin critic Alexander Litvinenko in 2006, a crime that led to an unprecedented degradation in ties.
Writing in his blog, Miliband admitted the differences but said a better relationship was essential for both countries.
"We don't always see eye to eye with Russia, but we share the same global challenges and it is important that we work on them together."
Russia's ambassador to London Yuri Fedotov declared in the Guardian newspaper that "the visit is a chance to reset our relationship."
But in a separate interview with Russia's Interfax news agency, Fedotov said the two sides would essentially have to agree to differ on a string of disputes.
"We are still unable to solve a number of painful questions that have appeared in the past years... But both sides have understood that the lack of understanding in these questions need not block cooperation in other areas."
While top officials from Latin American and Asian states have made regular stops in Moscow in recent years, the last serving British foreign secretary to visit for bilateral talks was Jack Straw in July 2004.
But there appears little chance of Russia wavering on possibly the biggest sticking point in improving ties -- its refusal to extradite Litvinenko murder suspect Andrei Lugovoi.
British police accuse Lugovoi of murdering Litvinenko, possibly by lacing his tea with radioactive polonium in a London hotel on November 2, 2006. He died three weeks later after suffering intense pain.
Lugovoi, who denies involvement in Litvinenko's death, was later elected to the Russian parliament for a generally pro-Kremlin party.
Litvinenko's widow Marina criticised Miliband's trip when it was announced last month, saying the timing was "adding insult to injury".
Adding to the tensions, Russia is equally angry over Britain's refusal to hand over Russian citizens convicted by the courts who have taken refuge in London, such as the businessman Boris Berezovsky.
As well as looking to overcome the problems in bilateral ties, Miliband will be seeking to secure Russian support for tough sanctions against Iran if the current round of diplomacy over its nuclear programme fails.
Moscow has so far failed to resoundingly back the Western threats against Iran although its envoy to Tehran on Sunday said the Iranian atomic drive lacks "complete transparency."
Meanwhile, speculation was still raging that Miliband was in line to win the new post of the EU's top diplomat, despite his denials. Miliband insists publicly that he is "not a candidate and not available".
The roles of president and High Representative for Foreign Affairs are set to be created when the EU's Lisbon Treaty is ratified.
The Sunday Times said Prime Minister Gordon Brown was discreetly backing Miliband, as the chances of former British premier Tony Blair becoming EU president appeared to be fading.

#British foreign minister in Russia
You May Also like: