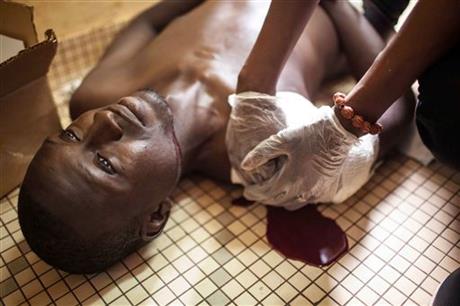 A protester who was shot during clashes is treated in a hospital in Ouagadougou, Burkina Faso, Thursday, Sept. 17, 2015. The protester later died. AP
OUAGADOUGOU: Burkina Faso's military on Friday released the country's interim president who was detained during a coup that dissolved his government. The prime minister remained under house arrest. The coup was led by members of a presidential guard still loyal to ex-President Blaise Compaore, who was ousted in a popular uprising last October after he angered people with an attempt to prolong his 27-year rule. The junta released a statement Friday saying that Michel Kafando had been freed from military custody. The former UN ambassador had been chosen to lead the political transition after Compaore's resignation until elections could be held. Kafando's government had organized national elections for Oct. 11. The presidential guard detained Kafando and the prime minister on Wednesday, and declared early Thursday that the transitional government had been dissolved. On Friday, Gen. Gilbert Diendere — a former top aide to Compaore who was named on Thursday as the country's military leader — said he had met with members of the international community to establish dialogue and to seek a long-term solution to the country's political crisis. The coup has been met with sharp international criticism. US National Security Adviser Susan Rice said Washington would "review our foreign assistance to Burkina Faso in light of evolving events." "We are deeply disappointed that the self-interested actions of a few are threatening the historic opportunity that the people of Burkina Faso have to cast their ballots and build a new future for the country," Rice said in a statement. Burkina Faso hosts French special forces and is an important ally of France and the United States in the fight against Islamic militants in West Africa. The coup sparked protests in the streets of the capital, and the presidential guard opened fire with live ammunition, witnesses said late Wednesday. Associated Press journalists saw the bodies of at least six victims at a morgue on Thursday.
#coup #Blaise Compaore
You May Also like: