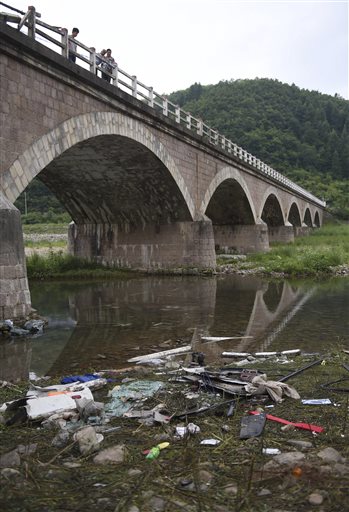 In this photo released by China's Xinhua News Agency, people watch the wreckage of a bus at the site of a road accident on Ji'an-Dandong Road in Ji'an City, northeast China's Jilin Province, Thursday, July 2, 2015. AP
BEIJING: A bus carrying a group of South Koreans fell off a highway bridge in northeastern China, killing 10 passengers and the Chinese driver, officials said Thursday. The accident took place Wednesday after the vehicle left the northeastern Chinese city of Ji'an and was about halfway to its destination of Dandong, which borders North Korea, the official Xinhua News agency said. China's Foreign Ministry said 28 people were aboard the bus — 26 South Koreans plus one driver and one tour guide from China. Ten South Koreans and the driver were killed, ministry spokeswoman Hua Chunying said, expressing condolences to the victims. Officials in South Korea said its nationals were on the bus as part of a 140-person delegation of mainly government employees. They were in China to tour historical sites, including places where Korean independence fighters resisted Japan's colonial rule before the end of World War II, according to officials from the South Korean Ministry of Government Administration and Home Affairs. The bus was part of a six-bus caravan, the South Korean officials said. Photos circulating online showed the bus resting on its top in shallow water under the bridge.
#China #South Korea #bus accident
You May Also like: