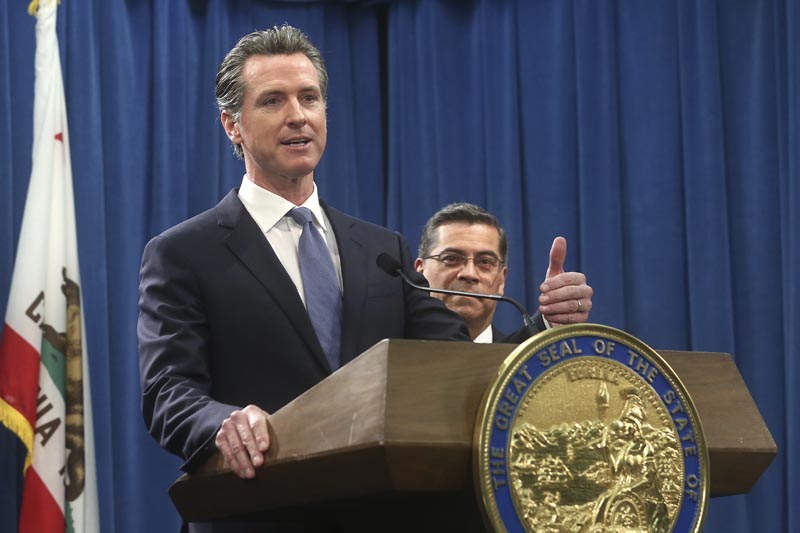 California Governor Gavin Newsom, left, flanked by Attorney General Xavier Becerra, right, answers a question concerning a lawsuit the state will likely file against President Donald Trump over his emergency declaration to fund a wall on the US-Mexico border Friday, February 15, 2019, in Sacramento, California.Photo: AP
SACRAMENTO: California is likely to sue President Donald Trump over his emergency declaration to fund a wall on the US-Mexico border, the state attorney general said Friday. Attorney General Xavier Becerra and Governor Gavin Newsom, both Democrats, told reporters that there is no emergency at the border and that Trump doesn't have the authority to make the declaration. "No one in America is above the law, not even the president of the United States," Becerra said. "The president does not have power to act frivolously." Trump declared a national emergency earlier in the day to bypass Congress to use money from the Pentagon and counterdrug efforts to fulfill his promise of completing the border wall. The president said immigrants entering the US illegally were invading the country. The announcement was immediately met with resistance from members of Congress. Becerra and Newsom said they were reviewing the emergency declaration but were likely to join other states in suing. They did not say when the state plans to file a lawsuit or what specific legal arguments it will use. But both challenge the notion that there was a true emergency. Becerra said past presidents used such declarations after the September 11 terrorist attacks and the Iran hostage crisis in 1979. Becerra pointed to Trump's comments earlier in the day that he did not need to issue the emergency declaration but was doing so to accelerate plans for his border wall. He suggested Trump hopes any legal challenges will ultimately be determined by the US Supreme Court. Republican presidents appointed five of the court's nine members. "He knows he will lose in court and that he is hoping to use the US Supreme Court as a tool in his game to fulfill a campaign promise," Becerra said. Newsom argued that Trump's plan to use money on the border wall that had been dedicated for military installations and combating drugs would hurt California. Newsom on Monday signed an executive order to pull most of California's 360 National Guard troops from the southern border but said 100 will remain there to help federal officials combating transnational drug crime. "Interdiction policies we are engaged in that we want to advance in California now are being put at risk because of this political crisis that's being manufactured," Newsom said. Building a wall, he argued, will not stop the flow of illegal drugs that come across ports of entry in vehicles or by other means. Becerra has filed at least 45 lawsuits against the Trump administration.
#US #Donald Trump #California #Democrats #lawsuits #border wall #Sue #Emergency declaration
You May Also like: