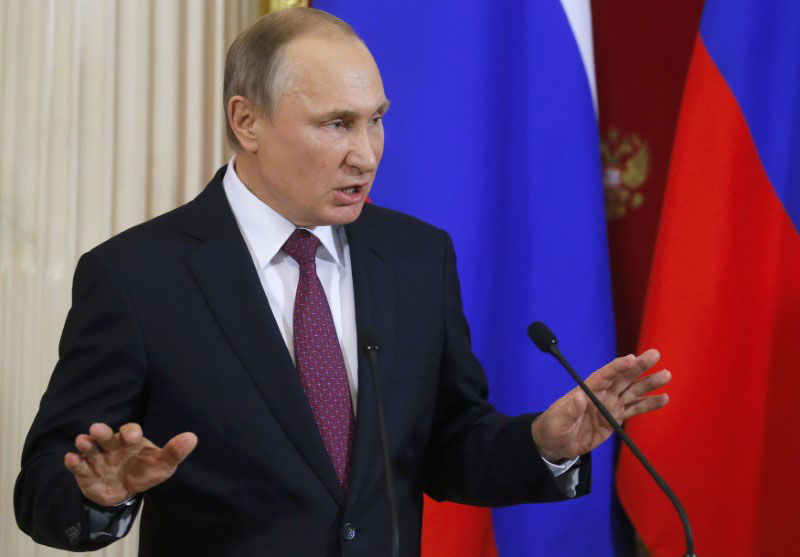 Russian President Vladimir Putin speaks during a news conference after a meeting with his Moldovan counterpart Igor Dodon at the Kremlin in Moscow, Russia, on January 17, 2017. Photo: Reuters

WASHINGTON:  In his first call as president with Russian leader Vladimir Putin, Donald Trump denounced a treaty that caps US and Russian deployment of nuclear warheads as a bad deal for the United States, according to two US officials and one former US official with knowledge of the call.

When Putin raised the possibility of extending the 2010 treaty, known as New START, Trump paused to ask his aides in an aside what the treaty was, these sources said.

Trump then told Putin the treaty was one of several bad deals negotiated by the Obama administration, saying that New START favored Russia. Trump also talked about his own popularity, the sources said.

The White House declined to comment on the details of the call. White House spokesman Sean Spicer said Trump knew what the New START treaty is but had turned to his aides for an opinion during the call with Putin. He said the notes from the call would not have conveyed that.

"I would say they had a very productive call," Spicer told reporters. He added, "It wasn't like he didn’t know what was being said. He wanted an opinion on something."

It has not been previously reported that Trump had conveyed his doubt about New START to Putin in the hour-long call.

New START gives both countries until February 2018 to reduce their deployed strategic nuclear warheads to no more than 1,550, the lowest level in decades. It also limits deployed land- and submarine-based missiles and nuclear-capable bombers.

During a debate in the 2016 presidential election, Trump said Russia had "outsmarted" the United States with the treaty, which he called "START-Up." He asserted incorrectly then that it had allowed Russia to continue to produce nuclear warheads while the United States could not.

“It’s impossible to overstate the negligence of the president of the United States not knowing basic facts about nuclear policy and arms control,” Shaheen said in a statement. "New START has unquestionably made our country safer, an opinion widely shared by national security experts on both sides of the aisle."

Daryl Kimball, the executive director of the Arms Control Association, a Washington-based advocacy group, said: "Unfortunately, Mr. Trump appears to be clueless about the value of this key nuclear risk reduction treaty and the unique dangers of nuclear weapons."

Secretary of State Rex Tillerson said he supported the treaty during his Senate confirmation hearings.

During the hearings Tillerson said it was important for the United States to "stay engaged with Russia, hold them accountable to commitments made under the New START and also ensure our accountability as well."

Two of the people who described the conversation were briefed by current administration officials who read detailed notes taken during the call. One of the two was shown portions of the notes. A third source was also briefed on the call.

Reuters has not reviewed the notes taken of the call, which are classified.

The Kremlin did not immediately respond to requests for comment.

The phone call with Putin has added to concerns that Trump is not adequately prepared for discussions with foreign leaders.

Typically, before a telephone call with a foreign leader, a president receives a written in-depth briefing paper drafted by National Security Council staff after consultations with the relevant agencies, including the State Department, Pentagon and intelligence agencies, two former senior officials said.

Just before the call, the president also usually receives an oral "pre-briefing" from his national security adviser and top subject-matter aide, they said.

Trump did not receive a briefing from Russia experts with the NSC and intelligence agencies before the Putin call, two of the sources said. Reuters was unable to determine if Trump received a briefing from his national security adviser Michael Flynn.

In the phone call, the Russian leader raised the possibility of reviving talks on a range of disputes and suggested extending New START, the sources said.

New START can be extended for another five years, beyond 2021, by mutual agreement. Unless they agree to do that or negotiate new cuts, the world's two biggest nuclear powers would be freed from the treaty's limits, potentially setting the stage for a new arms race.

New START was ratified by the US Senate in December 2010 by a vote of 71 to 26. Thirteen Republican senators joined all of the Senate’s Democrats in voting for the treaty, although Republican opponents derided it as naive.

The call with Putin was one of several with foreign leaders where Trump has turned to denounce deals negotiated by previous administrations on trade, acceptance of refugees and arms control.

In a phone call with Australian Prime Minister Malcolm Turnbull, Trump questioned an agreement reached by the Obama administration to accept 1,250 refugees now being held by Australia in offshore detention centers.