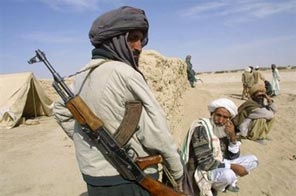 File photo shows a member of a Taliban militia watching over Afghan refugees near the Afghanistan-Iran border. Some 2.1 million people have died either directly or indirectly from armed violence over the last three years as talks on a global arms trade treaty have stalled, campaigners have said. Source: AFP

LONDON: Some 2.1 million people have died either directly or indirectly from armed violence over the last three years as talks on a global arms trade treaty have stalled, campaigners said Wednesday.

More than 2,000 people have died from such violence every day since 2006, when governments agreed on the need to regulate the arms trade, said British charity Oxfam and 11 other non-governmental organisations.

"Eight out of every 10 governments want to get an arms trade treaty agreed and ordinary citizens are calling for one too," said Jeremy Hobbs, executive director of Oxfam International.

"This month we need the majority of enlightened countries at the United Nations to make it happen. An intransigent few cannot be allowed to keep their foot on the brakes forever," he added.

In a report entitled "Dying for Action", the lobby groups lament that talks on a global arms trade treaty have been "going at a snail's pace because of self interest and delaying tactics by some major arms exporters."

Among the 2.1 million deaths -- mostly civilians -- more than 700,000 have been caused by armed conflicts including those in Somalia, Sudan, Afghanistan and Sri Lanka, according to the report.

This year the world's deadliest war in the Democratic Republic of Congo worsened, pushing the number up further, it said.

It lamented recent "dangerous" arms deals with Chad, Zimbabwe and Libya, which it says should not have been done "as thousands of weapons can end up in the wrong hands.

"In all these cases, the sale of arms should have never been authorised," said Hobbs.

Jan Egeland, the former UN Under Secretary General for Humanitarian Affairs, wrote a foreword to the report.

"Even though there has been a marked decline in wars since the fall of the Berlin Wall, the number of violent attacks against civilians has continued at intolerable levels," he said.

"Only a forceful, unambiguous and verifiable convention can control transfers and do away with the networks of illegal arms brokers that supply our generation's weapons of mass killings and mass misery."

#Campaigners press for arms trade
You May Also like: