KABUL: At least seven people were killed and 10 others, including four foreign nationals, were wounded in Kabul on Wednesday, when a van packed with explosive targeted a vehicle belonging to a foreign security company, Afghan security officials said. 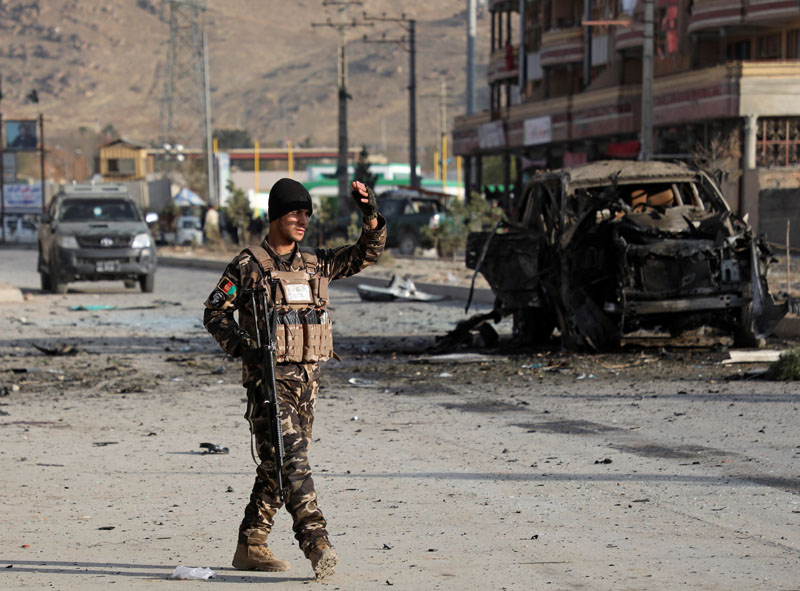 A member of the Afghan security forces keeps watch at the site of a suicide blast in Kabul, Afghanistan November 13, 2019. Photo: Reuters
There was no immediate claim of responsibility in the rush-hour attack, that comes a day after the Afghan government agreed on a prisoner exchange with the Taliban insurgents in the hopes of reviving peace talks. Nasrat Rahimi, a spokesman for the interior ministry, said a suicide bomber driving a van targeted an armoured vehicle that belonged to GardaWorld, a Canadian security company that saw four of its staff wounded in the attack. "Seven Afghan civilians were killed in the explosion and 10 people, including four foreign nationals, were wounded," Rahimi said. He did not disclose the nationalities of the four wounded, but a senior Afghan security official said they were either Indian or Nepalese nationals and Kabul police were currently working to identify the injured. GardaWorld and officials in the foreign ministries of India and Nepal did not respond to requests for comment. Two Taliban commanders and a leader of the Haqqani militant group were released in exchange for two professors, an American and an Australian, in a development some analysts had hoped could pave the way for stalled peace talks in Afghanistan. The Taliban has so far refused to engage with the foreign-backed Afghan government, which the insurgent group calls a "puppet" regime. One of the freed men, Anas Haqqani, is the younger brother of Sirajuddin Haqqani, the second-in-command in the Afghan Taliban hierarchy and leader of the Haqqani network, considered the deadliest faction of the Taliban and which has carried out some of the most brazen attacks in Kabul. Wednesday's attack came during a relative lull in violence after September's presidential election. During polling there was a surge in attacks by the Taliban that killed 85 people in ballot-related violence across the country. Nearly 4,000 civilians were killed or wounded in the first half of this year, including a sharp increase in the number of casualties caused by government and foreign forces, according to the United Nations.
#suicide bombing #Kabul #Afghanistan bombing #Canadian security company
You May Also like: