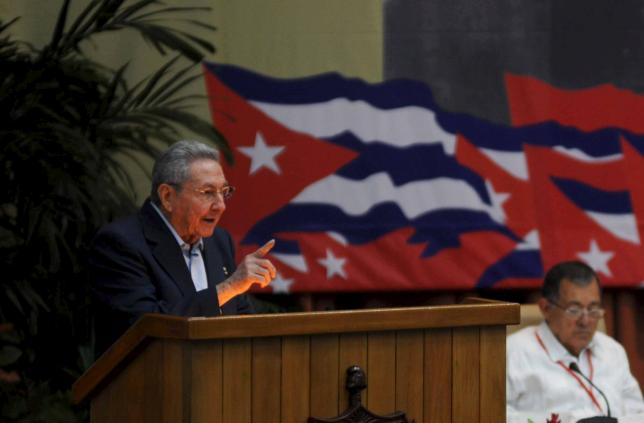 Cuba's President Raul Castro speaks during the opening ceremony of the seventh Cuban Communist Party (PCC) congress in Havana April 16, 2016. REUTERS/Omara Garcia/AIN/Handout via Reuters
HAVANA: Future top leaders of Cuba's Communist party should retire at 70 to let in younger blood, President Raul Castro said on Saturday, suggesting older members of the party hoping for promotion to the top table could play with their grandchildren instead. Cuba's current leaders include several septagenarian or octogenarian veterans of Fidel Castro's 1959 revolution. There is a growing urgency for them to make succession plans to keep the party alive once they are gone. Raul Castro himself is 84 and after his planned retirement from government in two years time the country is likely to be led by somebody with a different surname for the first time since his brother overthrew a pro-U.S. government nearly 60 years ago. His comments during a two hour speech at the inauguration of the Communist Party's twice-per-decade congress were met with silence, perhaps because some members were disappointed with the idea. "So serious! What silence is caused by this subject. Don't think that just because you can't be in the leadership of the country you can't do anything," Castro said, suggesting the elderly continue as party activists and spend more time with their grandchildren. Before the congress, the current party leadership faced some discontent among younger members critical of the slow delivery on promised economic reforms in the past five years and a lack of transparency. Fidel Castro, whose 90th birthday is in August, retired in 2008 after a serious illness and his younger brother took over, introducing a limit of two five-year terms for leaders. That limit has yet to be tested. The proposed new rules would affect new entrants into the leadership and must be approved by the party over the course of the four-day congress. Castro said there should then be a constitutional amendment and a referendum to codify this and other reforms. Castro proposed that 60 years be fixed as the age limit for entering the party's central committee and up to 70 years as the maximum age to perform duties in the party leadership, saying the new rules would have a knock-on effect of bringing younger leaders up through the ranks more quickly. "Somebody who is 65 or 70 is useful for important activities, but not the activities of an important leader," he said. On Monday, the party is due to vote for a new leadership, and is expected to re-elect Castro and the party number two Jose Ramon Machado Ventura, 85. Presumably the new rules would not apply to them because they are already within the leadership. Castro said the same age rules should be applied to other state bodies and the government. He reiterated that he would step down as president of the nation in 2018.
#Cuba #Fidel Castro #castro #Raul Castro
You May Also like: