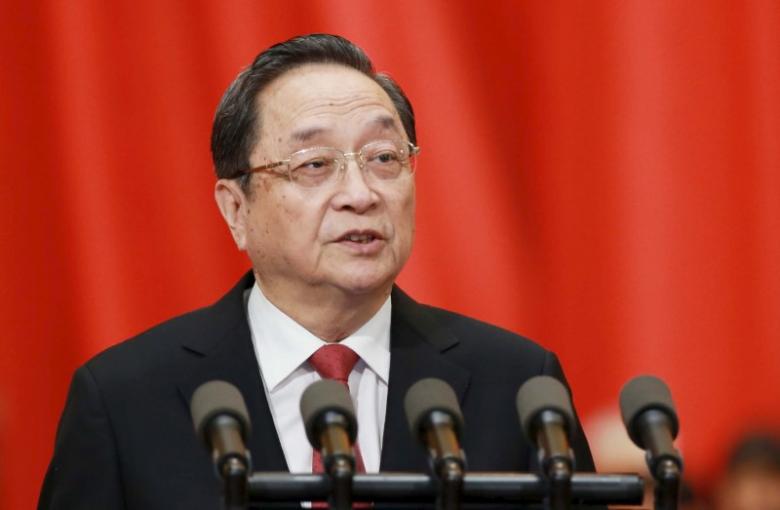 Yu Zhengsheng, chairman of the National Committee of the Chinese People's Political Consultative Conference (CPPCC) gives a speech during the opening session of the CPPCC at the Great Hall of the People in Beijing, China, on March 3, 2016. Photo: Reuters
Chinese Catholics must run their church independently, implying at arms length from the Vatican, and guide believers on a "Sinicisation path", said a senior Communist Party official, as China and the Vatican seek to improve relations. Pope Francis is trying to heal a decades-old rift with China where Catholics are divided between those loyal to the Vatican and members of a Chinese government-controlled official church. One of the obstacles to improving relations is the question of who should be able to appoint senior clergy. China says bishops must be named by the local Chinese Catholic community and refuses to accept the authority of the pope, whom it sees as the head of a foreign state that has no right to meddle in Beijing's affairs. Prospects for a deal were set back this month after Lei Shiyin, a government-backed bishop excommunicated by the Vatican, participated in the ordination of new bishops.. Catholics should "run their church independently and better integrate it into society", senior Communist party leader Yu Zhengsheng told the government-approved Chinese Patriotic Catholic Association and Bishops Conference of Catholic Church of China. "The church should adhere to the principles of self-administration, run religious affairs independently and guide believers to adhere to the Sinicisation path of the religion," said Yu, state news agency Xinhua reported late on Thursday. The Sinicisation of religion is likely a reference to bringing religion under Chinese influence. Chinese Catholics must "unify patriotism with affection for the Church" and "unite all believers to contribute to construction of the socialism with Chinese characteristics", said Yu, who heads a largely ceremonial body to parliament, one of whose aims is to represent religious believers. The Vatican should take steps to improve relations with China, the Chinese head of religious affairs said on Tuesday. The Vatican in turn said last week that Catholics in China were waiting for positive signals they could trust in a dialogue between China and the Holy See. The two sides have been at loggerheads since the expulsion of foreign missionaries from China after the Communists took power in 1949, and the Vatican's continued maintenance of official ties with self-ruled Taiwan, claimed by Beijing as its own. There are as many as 10 million Chinese Catholics in what is an officially atheist country, though the government technically guarantees freedom of religion for recognized groups, which also include Buddhists and Muslims.
#Vatican #Pope Francis #Communist Party #Yu Zhengsheng #Chinese Catholics #Sinicisation path
You May Also like: