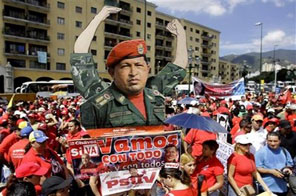 Supporters of the Venezuela's President Hugo Chavez hold up a image of him during a demonstration against Colombia's President Alvaro Uribe in Caracas, Saturday, Nov. 21, 2009. Source: AP

Chavez read aloud a letter to the 83-year-old former Cuban leader during a televised speech Saturday night, saying "Venezuela awaits you." Chavez proposed that Castro visit at some point between now and April, during a congress of his socialist party.

The 83-year-old Castro has not been seen in public since undergoing a series of emergency intestinal surgeries in July 2006. He handed the Cuban presidency to his brother Raul but has continued writing essays published by state media.

Chavez also has invited Castro to a mid-December meeting of the regional ALBA trade bloc in Havana, saying he is well enough to attend.

#Chavez invites Castro to Venezuela
You May Also like: