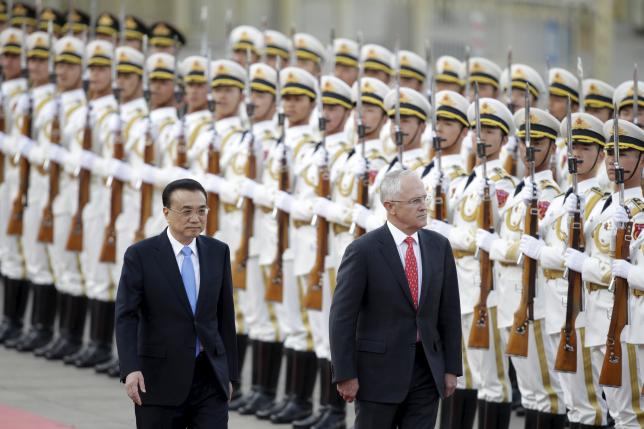 China's Premier Li Keqiang and Australian Prime Minister Malcolm Turnbull (R) review honour guards during a welcoming ceremony at the Great Hall of the People in Beijing, China, April 14, 2016. REUTERS
BEIJING: Australian Prime Minister Malcolm Turnbull invoked the spirit of late reformist leader Deng Xiaoping on Friday to urge China to continue opening up to the outside world, as he addressed concerns about Internet freedoms and market access for foreign firms. Turnbull's China visit, leading a delegation of 1,000 business leaders, the largest ever by an Australian leader, comes amid a slowing of growth in the Chinese economy, which is crucial for Australian jobs. Earlier this month, China raised taxes on goods bought on overseas e-commerce platforms, then sparked more confusion with a last-minute list that restricted some products from being sold through these channels, leading to sharp share price gyrations by firms in close trade partners like Australia. Asked about the new e-commerce restrictions, as well as China's tightening controls on the Internet and human rights issues in general, Turnbull said Australia and China have regular and very open discussion about rights. "The truth is, as I said in Shanghai, the more open China is the stronger it is," Turnbull told reporters. "Deng Xiaoping said, in the days when China was open to the world it was strong; when it became closed it became weak," he added, citing the man who ushered in China's landmark economic reforms more than three decades ago. China, the world's second-largest economy, is trying to shift to a more consumption-driven economic model as growth stalls. Shortly after Turnbull spoke, China announced its economy grew 6.7 percent in the first quarter from a year earlier, meeting expectations but at its slowest pace in seven years. Turnbull said Chinese Premier Li Keqiang told him how he was trying to boost the small business sector in China. "Premier Li explained how he saw enabling the small business sector, giving the small business sector the freedom to incorporate new businesses," Turnbull said. "So he recognises as part of his economic plan the freedom of businesses to incorporate, to get on and have a go as we would say, is critical to job creation and developing that more diverse economy that he aspires to. Of course we will all benefit from a stronger Chinese economy." While China and Australia have close business ties, including a free trade agreement, Canberra is also a strong security ally of the United States. Turnbull said all claimants in the disputed South China Sea should settle their disputes peacefully. China claims most of the energy-rich waters, through which about $5 trillion in ship-borne trade passes every year, but the Philippines, Brunei, Malaysia, Taiwan and Vietnam also have claims. Plans to deepen U.S.-Philippine military ties, including joint patrols in the South China Sea, reflect a "Cold War mentality", China's defense ministry said on Thursday, pledging to resolutely oppose any infringement on its sovereignty. "The remarkable economic gains in this region, by every country, including our own and of course including China, has been based on a foundation of peace and stability. And anything which has the potential of disturbing that peace and stability works against the interests of all nations," said Turnbull.
#China #Australia #Malcolm Turnbull #Deng Xiaoping
You May Also like: