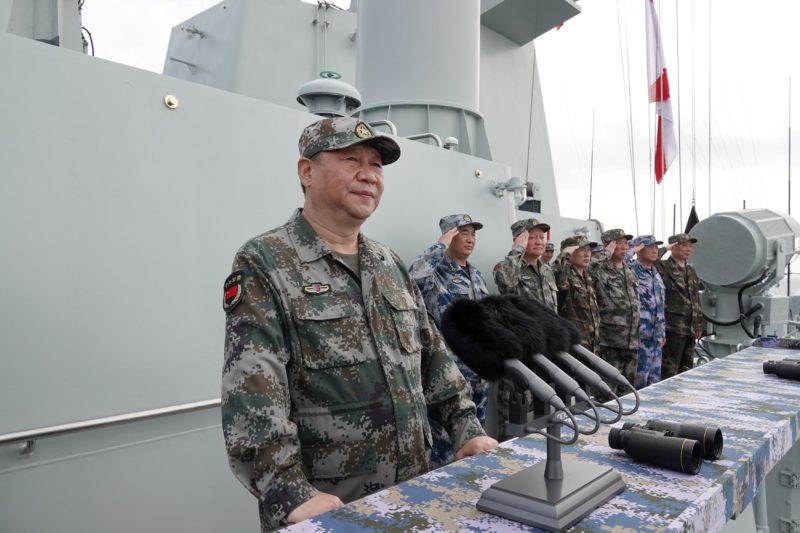 Chinese President Xi Jinping delivers a speech as he reviews a military display of Chinese People's Liberation Army (PLA) Navy in the South China Sea April 12, 2018. Photo: Li Gang/Xinhua via Reuters
BEIJING: President Xi Jinping presided over the Chinese navy’s largest-ever military display on Thursday, state media reported, the country’s latest show of force in the disputed South China Sea. State broadcaster China Central Television showed footage of Xi boarding the destroyer Changsha before sailing to an unspecified location in the South China Sea and watching the procession, which involved more than 10,000 naval officers, 76 fighter jets, and a flotilla of 48 warships and submarines. Xi told the assembled troops that China’s need for a world-leading naval force “has never been more pressing than today” and urged them to devote their unswerving loyalty to the party, before watching through binoculars four J-15 fighter jets take off from the Liaoning, China’s sole operational aircraft carrier. He said the People’s Liberation Army should work to develop its naval forces, build up modern maritime combat system and strengthen its capability in diversified military missions. China’s armed forces, the world’s largest, are in the midst of an ambitious modernization program, which includes investment in technology and new equipment such as stealth fighters and aircraft carriers, as well as cuts to troop numbers. But China’s military build-up has unnerved its neighbors, particularly because of its increasing assertiveness in territorial disputes in the East and South China Seas and over Taiwan, a self-ruled territory Beijing claims as its own. Also on Thursday, China announced it would hold live-fire military drills in the Taiwan Straits on April 18. Taiwan’s defence ministry said in a statement that its army had the situation under control and could ensure Taiwan’s safety. Xi, who as chairman of the Central Military Commission is also the army’s commander-in-chief, has shown a penchant for putting on eye-catching displays of military might, including a large-scale parade of tanks and missiles through the center of Beijing in 2015, and another in the remote Zhurihe training base of Inner Mongolia in July. The naval review comes as the USS Theodore Roosevelt, leading a carrier strike group, conducted what the U.S. military called routine training in the disputed South China Sea on Tuesday.
#South China Sea #People's Liberation Army #destroyer Changsha #resident Xi Jinping #naval display
You May Also like: