China says Xinjiang has no "ethnic problem" after Turkey protests 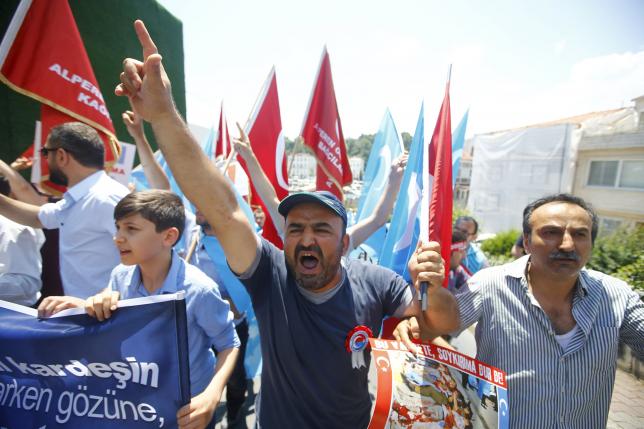 Demonstrators shout slogans during a protest against China near the Chinese Consulate in Istanbul, Turkey July 5, 2015.  Photo: Reuters
BEIJING: China has no "ethnic problem" in its far west, and Muslim Uighur minorities there enjoy freedom of religion, the Foreign Ministry said on Monday, following anti-China protests in Turkey over Beijing's treatment of the group. Relations between China and Turkey have soured over Beijing's policies toward the Uighur people, whose traditional home is in the far western region of Xinjiang. Many Turks see themselves as sharing religious and cultural ties with Uighurs, who have reportedly been banned from worship and fasting during the holy month of Ramadan. "Uighurs live and work in peace and contentment and enjoy freedom of religion under the rules in the constitution," Foreign Ministry spokeswoman Hua Chunying told reporters at a regular briefing. "So the so-called 'Xinjiang ethnic problem' you mentioned that has been raised in some reports simply does not exist." Hundreds of protesters marched on the Chinese consulate in Istanbul on Sunday, bearing flags and chanting anti-China slogans outside the building. Turkey vowed last week to keep its doors open to Uighur migrants fleeing persecution in China. Turkey has also irked China by expressing concern over the reports of restrictions on Uighurs during Ramadan. Hundreds of people have been killed over the past three years in a series of attacks in Xinjiang. Beijing has blamed the attacks on Islamist militants who seek to form an independent state called East Turkestan.
#China #Xinjiang #Anti-China protests #Muslim Uighur #China minorities #China ethnic minorities
You May Also like: