China to step up patrols to create "first class" navy 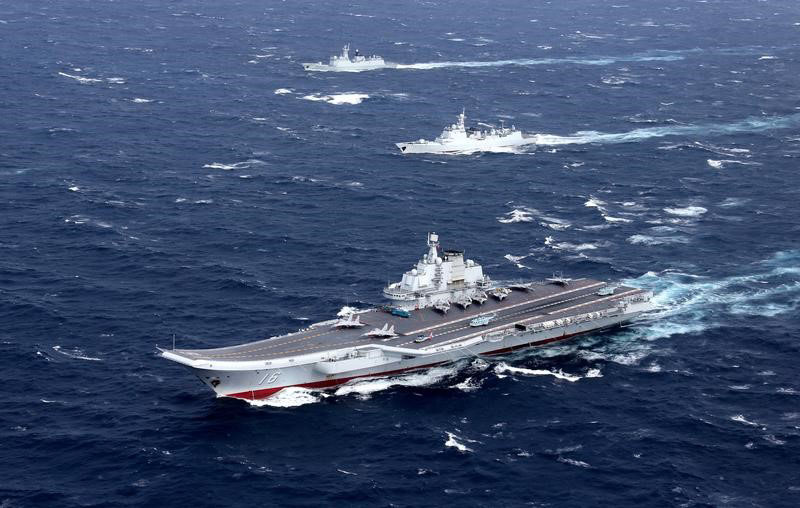 File - China's Liaoning aircraft carrier with accompanying fleet conducts a drill in an area of South China Sea, in this undated photo taken in December, 2016. Photo: Reuters
BEIJING: China will step up patrols and ensure it has a "first class" navy equipped with the best armaments, senior military officers told the official Xinhua news agency, as China steps up its ability to project power far from its shores.
China's navy has been taking an increasingly prominent role in recent months, with a rising star admiral taking command, its first aircraft carrier sailing around self-ruled Taiwan and new Chinese warships popping up in far-flung places. With President Donald Trump promising a US shipbuilding spree and unnerving Beijing with his unpredictable approach on hot button issues including Taiwan and the South and East China Seas, China is pushing to narrow the gap with the US Navy. Wang Weiming, deputy chief of staff of the People's Liberation Army Navy, told Xinhua on the sidelines of the annual meeting of parliament that China is speeding up the development of a marine corps, adding destroyers and frigates and will step up air and sea patrols. "We will intercept any intruding aircraft and follow every military vessel in areas under our responsibility," Wang said. "Our sailors should stay vigilant and be able to deal with emergencies at all times." China's second, domestically-developed aircraft carrier is in "good shape" and now awaiting fitting, he added, in comments reported late Thursday. Experts expect it will enter service around 2020, joining China's existing, Soviet-built carrier the Liaoning. Another senior officer, Li Yanming, political commissar of the Navy's armaments department, said a "first-class navy should be equipped with first-class armaments", the report added. Navy arms manufacturing would have "better quantity, quality, scope, and functionality", Li said, without elaborating. China's military ambitions, including taking a more assertive stance in the disputed South China Sea, including building artificial islands and ramping up defence spending, have long rattled its neighbours. China this year initially failed to publicly release its defence budget on the opening day of parliament as it has done in previous years, finally saying a day later on Monday that it would rise by 7 percent to 1.044 trillion yuan ($151.12 billion). China's defence spending amounts to only about a quarter of the U.S. defence budget, though many experts believe its actual spending on the military to be higher than the official figure. China denies it is a military threat to anyone. Wang Huayong, deputy political commissar of the Eastern Theatre Command, told Xinhua that Chinese forces are for defensive purposes only. "The aircraft carrier is still in training and trial stage. The marines remain weak, and the number and quality of long-distance vessels do not meet expectations." China's navy is not seeking to be a bully or trying to build a force beyond a level compatible with the country's development and its military still lags behind China's current power and status, he said.
#China #Xinhua #Donald Trump #China-US relations #China navy #China defence #Wang Weiming
You May Also like: