China warns US of 'serious consequences' over Washington plaza name 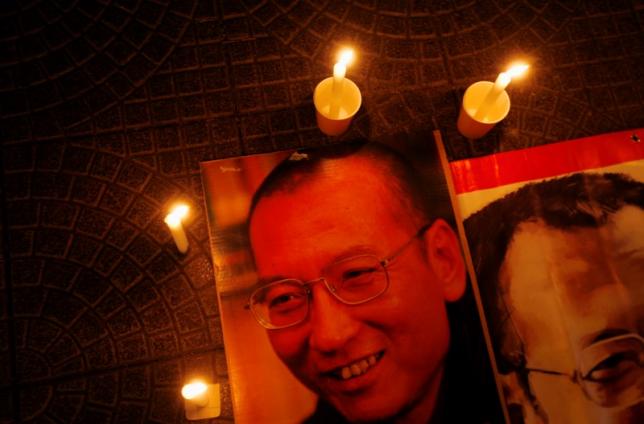 Candles are placed around portraits of jailed Chinese pro-democracy activist Liu Xiaobo during a candlelight vigil demanding his release, outside the Legislative Council in Hong Kong November 2, 2010. Reuters
BEIJING: China's Foreign Ministry warned the United States on Tuesday there would be "serious consequences" if a plaza in front of the Chinese embassy in Washington was named after a pro-democracy dissident and Nobel Peace Prize winner. By unanimous voice vote, the US Senate on Friday backed a plan to name the plaza after Liu Xiaobo, jailed for 11 years in 2009 on subversion charges for organising a petition urging an end to one-party rule. China views Liu as a criminal. Chinese Foreign Ministry spokesman Hong Lei said the move ran "contrary to the basic norms of international relations" and China was resolutely opposed to it. "If the relevant bill is passed into law it will cause serious consequences. We demand the US Senate stop promoting the bill and hope the US executive authorities put an end to this political farce," Hong told a daily news briefing, without elaborating. On Sunday, the Global Times, an influential Chinese state-run tabloid, said the naming scheme was "futile". "The US has been at its wits' end in dealing with China as it is reluctant to employ military threats or economic sanctions that may backfire. The only option for Washington seems to be petty actions that disturb China," it said in an editorial. The bill had been introduced by Senator Ted Cruz, a leading contender for the 2016 Republican presidential nomination. A White House spokesman has said President Barack Obama's senior advisers would recommend that he veto the bill and it was not an effective way to secure Liu's release.
#United States #China
You May Also like: