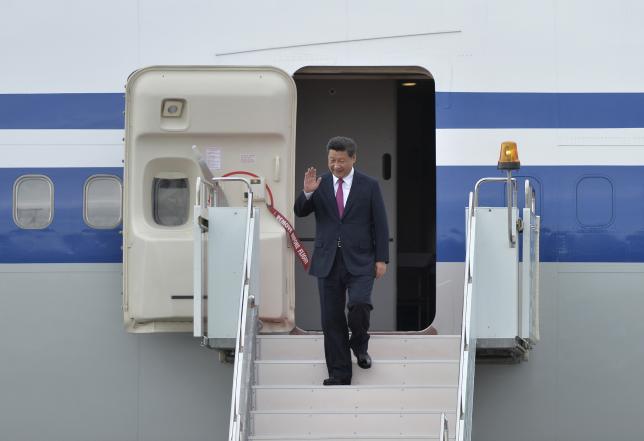 Chinese President Xi Jinping waves upon his arrival before attending the Shanghai Cooperation Organization (SCO) and the BRICS summits in Ufa, Russia, July 8, 2015. REUTERS
BEIJING: Chinese President Xi Jinping has visited a sensitive border area with North Korea populated by ethnic Koreans, state media said on Friday, amid tension over the North's disputed nuclear programme and killings blamed on North Korean troops. Xi arrived in Yanbian, which is nestled up on the northeastern corner of the border, on Thursday, wading into rice fields, chatting to villagers about toilets and visiting a pharmaceutical factory, the official Xinhua news agency said. While the report made no direct mention of North Korea, a country Xi has yet to visit since assuming power in late 2012, he talked up Yanbian's agricultural prowess - something that stands in marked contrast to North Korea's constant struggle to feed itself. "China has 1.3 billion people, and we need to rely on ourselves to hold up our grain production. We need good grain brands, to get good prices and good results. I hope you have a great harvest," Xinhua quoted Xi as saying. China is North Korea's last major ally, but relations have soured in recent years, while China has grown closer to the North's rival, South Korea. China's state media carried a picture showing Xi clapping at a dance performance by villagers dressed in traditional Korean clothing. Xi promised that the government would lead a "toilet revolution" to ensure that villagers would no longer have to use earth toilets. There are close family, cultural and business links between ethnic Koreans on both sides of the border. China has tried to get North Korea to embark on economic reforms, and has set up trade zones with North Korea along the border, though little progress has been made. But China's ties with North Korea have been strained over the North's banned nuclear programme. North Korea is under U.N. sanctions because of its nuclear tests and missile launches. Border crime involving impoverished North Koreans has also been an irritant between North Korea and China. In April, three residents of a Chinese border village were reportedly killed by North Korean soldiers searching for food and money. Last year, a North Korean murdered a Chinese family of three, prompting Beijing to file a formal complaint to Pyongyang, Chinese media reported in January. Defectors fleeing North Korea often try to cross the 520 km (320 mile) long Tumen River that runs between China and the secretive state.
#Chinese President Xi Jinping #North Korea visit
You May Also like: