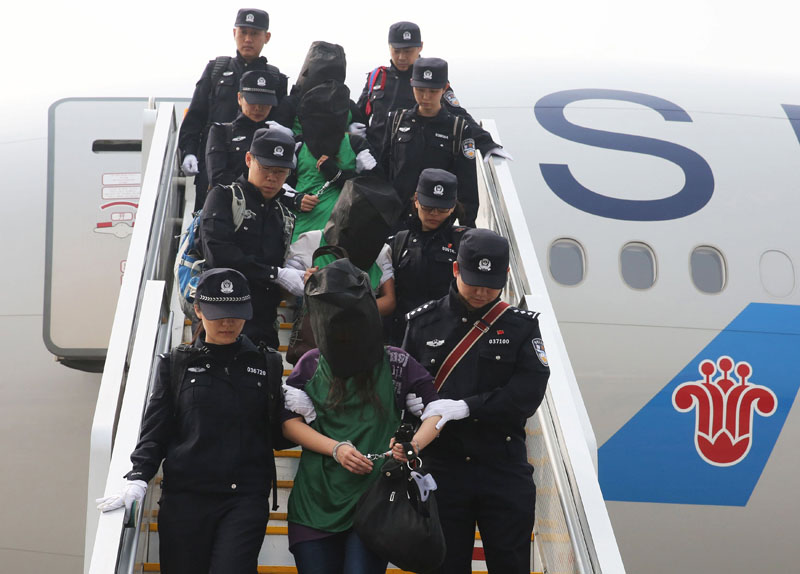 Police escort a group of people wanted for suspected fraud in China, after they were deported from Kenya, as they get off a plane after arriving at Beijing Capital International Airport in Beijing, China, on Wdnesday, April 13, 2016. Photo: Yin Gang/Xinhua via Reuters

BEIJING: The deportation of nearly four dozen Taiwanese from Kenya to China, where they're being investigated over wire fraud allegations, is focusing new attention on Beijing's willingness to assert its sovereignty claim over Taiwan, and the leverage it wields over smaller nations in backing that position.

A Chinese spokesman said Wednesday that under Chinese law, Beijing has jurisdiction in the case of the 45 Taiwanese because the victims of the crimes they're suspected of committing were Chinese. They're part of a larger group of 117 Taiwanese and mainland Chinese detained by Kenya on suspicion of trying to swindle money from Chinese victims using electronic communications.

Yet legal experts say Chinese law is not quite so explicit and the case's handling appears to be based mainly on the "one-China principle" that insists Taiwan be viewed as part of China — and Taiwanese as Chinese for legal purposes.

"I think the Chinese are taking a hard approach to these matters," said Joseph Cheng, a scholar of Chinese politics formerly at the City University of Hong Kong. "They are saying we can play hard ball and in places like Kenya, we have a lot of influence."

Analysts say China's specific goal is to extract concessions from Taiwanese President-elect Tsai Ing-wen, who has refused to endorse Beijing's position that Taiwan and the mainland are part of a single Chinese nation. The sides split amid civil war in 1949, and China has threatened to use force to gain control over the self-governing island.

Part of Beijing's approach is to isolate Taiwan internationally, excluding it from global institutions like the United Nations and leaving it with just 22 formal diplomatic allies. Kenya and Taiwan have never had diplomatic relations.

Although Beijing eased the pressure under Taiwan's China-friendly outgoing president, Ma Ying-jeou, indications are it's redeploying such tactics to influence Tsai ahead of her May 20 inauguration.

"They are saying that unless we get an agreement, we will do what we want without consulting you," Cheng said.

One of the first signs came last month when China established diplomatic relations with the Taiwanese ally of Gambia. In that case, Beijing said only that it was acceding after months of requests from the small African nation.

As a major investor in Africa, China has used its influence with several of the continent's governments to further its own aims. South Africa has barred the Dalai Lama, a nemesis of Beijing, while Zambia has used force to suppress anti-management protests against Chinese-run copper mines.

Kenya is a particularly close ally and its government may have been more than willing to comply with Chinese demands that the Taiwanese be turned over to Beijing. Along with massive investment in Kenyan infrastructure and businesses, China has chosen the capital, Nairobi, as the African hub for state broadcaster CCTV's African operations.

"Kenya has diplomatic relations with China and it regards Taiwan as China's Taiwan," said Beijing lawyer Li Fangping, who said Chinese law about jurisdiction in such cases is not very explicit. "The deportation may be based on the bilateral agreements between China and Kenya."

It's not clear whether Chinese jurisdiction had been invoked in previous cases where Taiwanese were detained abroad on suspicion of taking part in similar scams targeting mainland Chinese.

Taiwan has strongly protested over the case's handling, saying Kenya ignored due process and China violated a tacit agreement not to interfere in legal matters involving Taiwanese abroad. However, officials say it will send a legal team to Beijing to look into the matter in response to a Chinese invitation.

"Of course I have expressed our deep disappointment about the whole process. What they have done was rude and they didn't follow the agreement we made before for dealing with this kind of case together," Taiwan's top China envoy, Andrew Hsia, said Wednesday in discussing a Tuesday phone conversation with his Chinese counterpart Zhang Zhijun.

An Fengshan, a spokesman for the Chinese Cabinet's Taiwan Affairs Office, reiterated China's claim to jurisdiction in the case, but also sought to reassure people on the island. "The legal rights and interests of the criminal suspects will be guaranteed according to the law," he said at a news conference Wednesday.

An also said the authorities in Taiwan haven't done enough to crack down on Taiwanese-led gangs that China says have defrauded its citizens and companies of hundreds of millions of dollars.

Kenya says it acted inappropriately, and a government official on Tuesday denied Taiwanese claims that tear gas was used to force some of the Taiwanese to board the flight to China.

Some of the Taiwanese deportees have already arrived, but the detention center in Beijing believed to be holding them declined to confirm their presence. The spokesman's office for the city's police department did not immediately respond to faxed questions about the issue.

Cheng, the scholar of Chinese politics, said he expects China to continue employing such pressure until Tsai concedes, but will use legal and diplomatic justifications to avoid the appearance of direct threats. "They don't want to create a negative impression," he said.