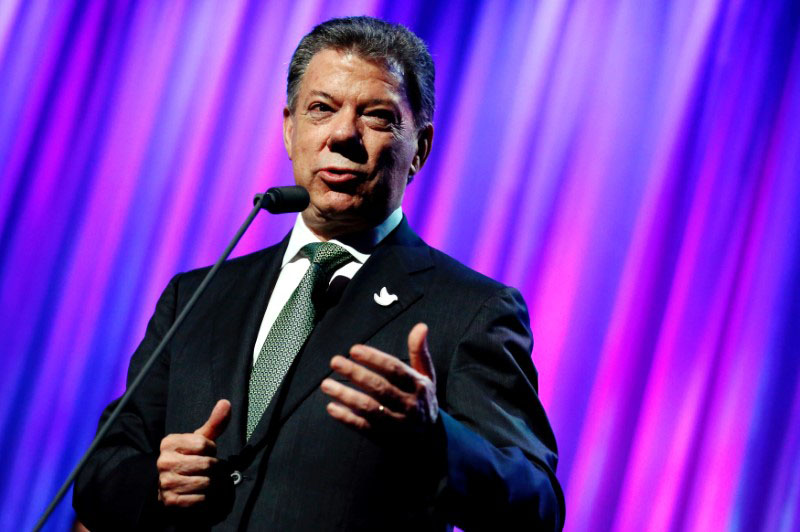 File - Colombia's President Juan Manuel Santos speaks to guests after receiving the Clinton Global Citizen Award in New York, US, on September 19, 2016. Photo: Reuters
Colombia's President Juan Manuel Santos on Thursday extended his ceasefire with Marxist FARC rebels through the end of the year as he seeks to revive a peace accord to end five decades of war after voters rejected the hard-fought deal in a referendum. The original ceasefire, which was put in place in August, was nullified when the peace accord was rejected in plebiscite earlier this month. He had already extended it to October 31. The decision comes as Santos and his team hear proposals from representatives of those who voted against the accord - rejected by a razor-thin margin of less than half a percentage point - as too lenient on the Marxist rebels. He will take the proposals to the FARC leadership in Havana, who have said they are willing to discuss new ideas. Santos said he decided to extend the ceasefire further after meeting with student leaders who had organized two huge marches through Bogota to show support for a peace accord. "One of the students reminded me, that in the army and in the guerrilla ranks, there are young people waiting to see what happens, hoping that they don't need to fire another shot," Santos said in a televised address. "For that reason, and at the request of the students, I have taken the decision to extend the ceasefire until December 31." The ceasefire can be extended further, but Santos said he hopes a new deal is approved long before then. Santos won the 2016 Nobel Peace Prize on Friday for his efforts to end the war. Led by hardline former President Alvaro Uribe, the "No" side wants rebels who have committed war crimes to be confined for five to eight years - possibly on agricultural farms - and banned from elected office. They were outraged that the accord offered 10 congressional seats and non-traditional sentences like clearing landmines instead of prison cells in return for ending a conflict that has killed more than 220,000 people. Although the FARC leadership has said it is willing to hear new ideas, Uribe's proposals may be difficult to accept, given they have repeatedly refused to consider jail time and want to form a political party.
#Juan Manuel Santos #Marxist FARC rebels #Colombia's peace accord #Colombia ceasefire
You May Also like: