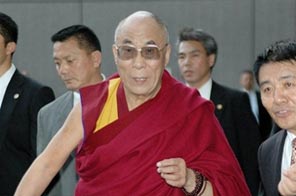 Tibetan spiritual leader the Dalai Lama said he was surprised at China's protest against his planned visit to an area of India claimed by Beijing, hinting he backed India on the border issue. Source: AFP

TOKYO: Tibetan spiritual leader the Dalai Lama said he was surprised at China's protest against his planned visit to an area of India claimed by Beijing, hinting he backed India on the border issue.

The Dalai Lama also criticised China's one-party rule and its state-controlled media, while praising India's "successful" democracy.
The Buddhist monk, who arrived in Tokyo Friday for a week-long stay in Japan ahead of November 8 visit to Arunachal Pradesh state in the northeast of India where China and India fought a border war in 1962.
"I was surprised" at China's criticism of the planned visit, the Dalai Lama told reporters when asked about the motive behind his trip.
"Because in (19)62, the People's Liberation Army already reached that area, already occupied... then India sort of pushed them back. The Chinese government unilaterally (made) ceasefire, withdrawal," he said. "So what's the problem?"
The Dalai Lama, who fled to India in 1959 after China crushed an anti-Chinese uprising in Tibet, is viewed as a "splittist" by Beijing, although he says he wants autonomy rather than full independence for his Himalayan homeland.
China has said it is "firmly opposed" to the Dalai Lama's trip to Arunachal Pradesh.
"One reason why India is successful in democracy is ... that (for) more than 2000 years India (has had) this strong tradition to respect different views," the Dalai Lama said, stressing the importance of respecting different religions and the views of non-believers.
He also criticised China's one-party state and lack of media freedom.
"People in China (have) no free information, too much sensation. And their own newspaper, media -- all their information is one-sided propaganda," he said.
The Dalai Lama called for journalists from the international media to visit China to "find the reality" in the western regions of Tibet and Xinjiang, home to the Tibetan and Uighur ethnic minorities, respectively.
Deadly unrest broke out in Tibet in March 2008 and July this year in Xinjiang as part of long-standing friction between China's majority Han population and ethnic minorities.

#Dalai Lama defends India visit
You May Also like: