Death toll from accident to Pakistan army train rises to 17 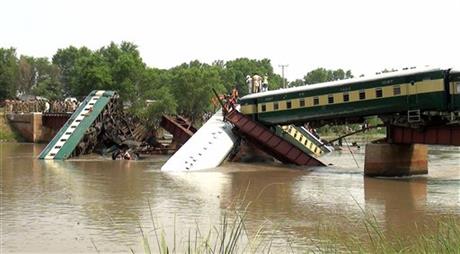 People gather during a rescue operation, after a bridge collapse led a train to fall into a canal in Wazirabad, near Lahore, Pakistan Thursday, July 2, 2015. At least four cars of a train being used to transport Pakistani soldiers fell into a canal because of a bridge collapse in the eastern Punjab province on Thursday, killing at least twelve soldiers, officials said. AP

ISLAMABAD: Pakistan's military said Friday the death toll from an accident to a special train that plunged into a canal because of a bridge collapse has risen to seventeen. Divers were searching for more bodies.

The train derailed Thursday while crossing the Chanawan canal near the industrial city of Gujranwala in eastern Punjab province. Civil authorities and commandos and divers from the army retrieved 80 passengers, five of whom had been injured.

Pakistani army spokesman, Maj. Gen. Asim Bajwa, tweeted Friday that so far 17 bodies had been recovered and that the rescue work was still in progress.

The dead soldiers included the unit's commander, his wife and a daughter, the state-run Pakistan television said.

Shortly after the accident, soldiers broke the windows of the train with hammers and pulled out passengers trapped inside.

Pakistan Railways spokesman Abdul Rauf Tahir says another passenger train carrying hundreds of people had passed over the same bridge about 90 minutes before the train carrying soldiers fell into the canal.

"We frequently examine our bridges, but it is too early to say what caused the accident," he told The Associated Press.

Shuja Khanzada, the provincial home minister, told reporters that the crash appeared to be an accident but that authorities were still investigating.

Pakistan's Prime Minister Nawaz Sharif expressed his "deep grief and sorrow" over the accident in a statement and conveyed his condolences to families of "martyred" soldiers.

Earlier, an army official and a government official said the train was being used by Pakistan's army to transport soldiers from the southern Sindh province. They said hundreds of soldiers were participating in the rescue operation and experts from the army were examining the bridge to determine the cause of the collapse.

They said some of the army officers on board the train were traveling with their families.

The two officials spoke on condition of anonymity because they were not authorized to brief media.

Train accidents are common in Pakistan, where tracks and bridges are often poorly maintained. Small separatist groups in Pakistan's southwestern Baluchistan have been known to bomb railway tracks.

#death toll #Pakistan army train accident
You May Also like: