Trump has shifted away from complete Muslim ban - Pence 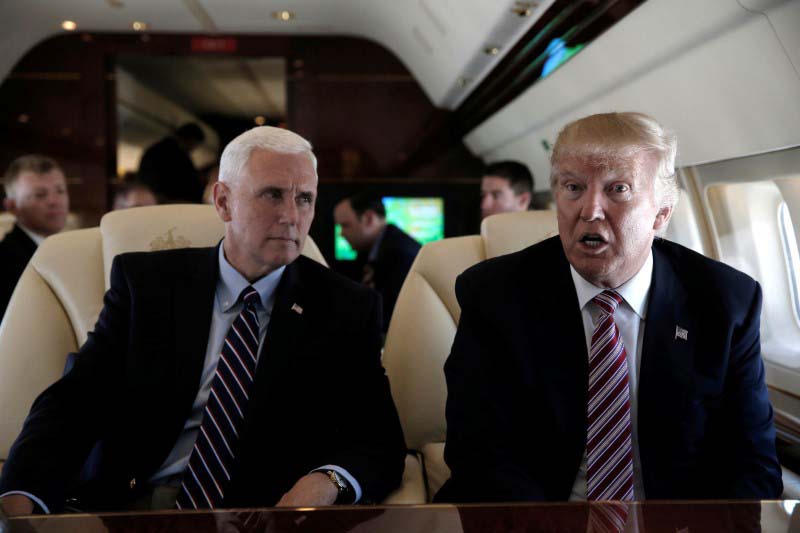 File- Republican presidential nominee Donald Trump and his running mate Indiana Governor Mike Pence speak to reporters aboard Trump's plane as they travel between campaign stops in Ohio, US, on September 5, 2016. Photo: Reuters
WASHINGTON: Donald Trump has backed away from a total ban on Muslims entering the United States, vice presidential running mate Mike Pence said on Thursday, a shift from one of the Republican presidential candidate's most provocative proposals. Trump's call last December for "a total and complete shutdown of Muslims entering the United States" followed an Islamic State-inspired mass shooting in San Bernardino, California, by a husband-and-wife team. Critics have called the proposed ban discriminatory and probably a violation of the US Constitution's guarantee of freedom of religion, and Democrats have used Trump's policy to declare him a bigot. In recent months, Trump has said he would suspend immigration from countries where Islamist militants are active but has left vague as to whether this amounted to a narrowing or an expansion of his original policy position. Pence said in a round of television interviews that if elected on November 8, Trump would suspend immigration from "countries that have been compromised by terrorism." Asked if this amounted to a ban on Muslims, Pence said on MSNBC's "Morning Joe" show: "Of course not." On CNN's "New Day," Pence was asked why, given that he had been against the ban before becoming Trump's running mate, he was not opposing it now." "Well, because it's not Donald Trump's position now," replied Pence.
#United States #Donald Trump #Mike Pence
You May Also like: