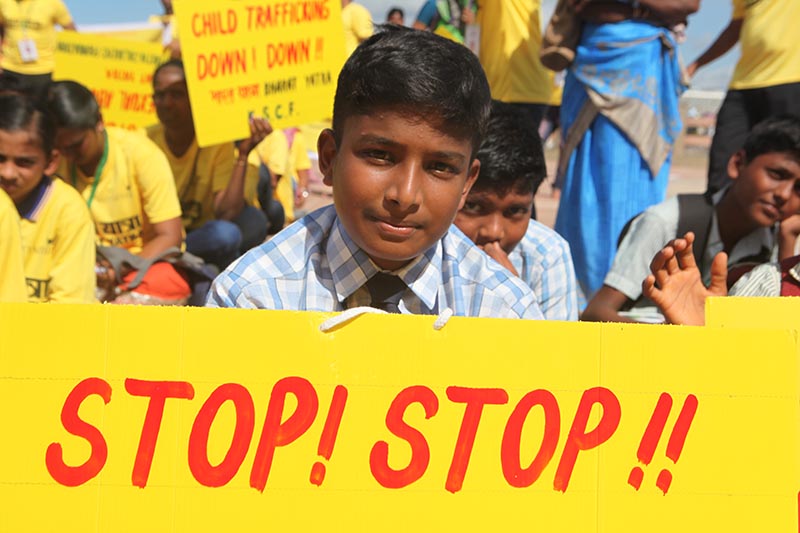 A schoolboy holds a sign calling for end of child trafficking and sex abuse at an event to kick off what is expected to be the world's largest march against such crimes in Kanyakumari in India's Tamil Nadu state, on September 11, 2017. Photo: Reuters

KANYAKUMARI: Thousands of people gathered in southern India on Monday to kick off what is expected to be the world’s largest march against the trafficking and sexual abuse of children as reports of such crimes continue to rise in the country.

Organized by Nobel Laureate and child rights activist Kailash Satyarthi, over 10 million people from across India are due to take part in the month-long “Bharat Yatra” - or India March - which will end in the capital New Delhi on October 16.

Flagging off the march from Kanyakumari, a coastal city on the southern-most tip of India in the state of Tamil Nadu, Satyarthi told crowds of school children, officials and activists it was time to shatter the silence around such crimes.

“The sun rises every morning. But today this morning is different and this sun is different. Today this sun rises to dispel the darkness of fear, hopelessness and shame faced by our children. Today we march to end this,” Satyarthi said.

Children in India face a barrage of threats ranging from human trafficking, sexual violence and early marriage to a lack of access to quality education and healthcare, say activists.

More than 9,000 children were reported to have been trafficked in 2016, a 27 percent rise from the previous year, according to government data.

Most are from poor rural families who are lured to cities by traffickers who promise good jobs, but then sell them into slavery as domestic workers, to work in small manufacturing units, farming or pushed into sexual slavery in brothels.

In many cases, they are not paid or are held in debt bondage. Some are found, but many remain missing.

Figures from the National Crime Records Bureau also show that almost 15,000 children were victims of sexual violence such as rape, molestation and exploitation for pornography in 2015 - up 67 percent from the previous year.

But these figures are just the tip of the iceberg in socially conservative India, say activists, where fear of being blamed, shamed or stigmatized means victims and their families often keep quiet and do not report the abuses they face.

Satyarthi, whose charity Bachpan Bachao Andolan (Save the Childhood Movement) has rescued 80,000 enslaved children, said the march was part of a three-year campaign to spread public awareness and push for stronger policies on child protection.

The march participants will travel around 11,000 km (7,000) miles) and cover 22 of India’s 29 states. They will stop in towns and villages, visit schools and colleges and hold events with local officials, police, religious and community leaders.

Monday’s kick-off saw thousands of children from remote areas across the country traveling to Kanyakumari to participate in the event. They chanted slogans and waved banners calling for an end of child slavery and child sexual abuse.

“I am here today as I want to help protect other children like me,” said Ruby Kumari, 14, a pony-tailed schoolgirl from the district of Koderma in India’s eastern Jharkhand state.

“We want to tell people that we are the future of this country and we want a safe environment for all children. They should be able to go to good schools and not sent to work.”

The event also saw the participation of parents and their children who are survivors of sexual abuse and child labor.

Thirty-five-year-old Moti, whose two teen daughters were raped by a family friend in the northern state of Punjab for years before the crime was discovered, said he hoped the march would help parents understand the dangers faced by children.

“I had no idea that this was happening to my daughters. I trusted this man and he did this to my daughters,” said Moti, as he sat amongst the crowds, wearing a bright yellow t-shirt with #MakeIndiaSafe printed on the back.

“If there had been marches like this before, perhaps I would have known better and I could have saved them. Now I am here to take part in his march so that it doesn’t happen to other children and parents won’t have to go through what I did.”
#India #Kailash Satyarthi #Nobel laureate #Southern India #sexual abuse of children #world's largest march #march against trafficking #child right activist #Bharat Yatra #India March
You May Also like: