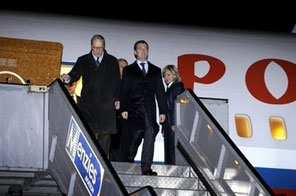 Russian President Dmitry Medvedev (C) arrives at Stockholm's Arlanda airport. EU and Russian leaders meet at a summit in Stockholm on Wednesday set to be dominated by energy issues, as Europe hopes to avoid an interruption of Russian natural gas supplies via Ukraine this winter. Source: AFP

STOCKHOLM: EU and Russian leaders meet at a summit in Stockholm on Wednesday set to be dominated by energy issues, as Europe hopes to avoid an interruption of Russian natural gas supplies via Ukraine this winter.

Sweden, which currently holds the rotating European Union presidency, is also expected to press Moscow on human rights issues in the north Caucasus -- a sensitive subject -- as well as climate change, the global economy and a follow-up of the G20 summit.

"The two sides are very likely to discuss the establishment of a sustained dialogue in the field of energy, security of oil and gas supply and energy efficiency," Russia's ambassador in Stockholm Igor Neverov said in a statement.

On Monday, Russia and the EU signed an energy early warning agreement they said would help avert a sudden disruption of gas supplies.

A quarter of the gas consumed throughout the European Union comes from Russia, with most of it transiting Ukraine, which regularly has rows with Moscow over bills.

Russia has warned repeatedly in recent weeks that Ukraine, which has been badly hit by the global economic crisis, could have trouble paying its gas bills to Moscow this winter.

Price and pay disputes between Russia and Ukraine in recent years have led to serious gas supply disruptions across the EU. In January, Russia cut off gas supplies to more than a dozen European countries for two weeks.

Under the agreement signed in Moscow, Russia and the EU will notify each other of any likely disruption to supplies of oil, gas or electricity and jointly work to find a solution, the European Commission said in a statement.

Third parties will be allowed to participate in the arrangement, the Commission said.

Russia would like the European Union to aid Kiev financially to pay its gas bills to avoid any more problems, an issue likely to be discussed on Wednesday.

"An energy crisis like the one the EU suffered in January is harmful for supply, transit and consuming countries alike," said EU Energy Commissioner Andris Piebalgs.

"We need to do everything necessary to make sure that such a situation never happens again," said Piebalgs, who signed the deal with Russian Energy Minister Sergei Shmatko.

But the energy talks could be aggravated by Sweden's plans to press Russia on its human rights record.

"If Sweden pushes the human rights issue in north Caucasus, Russia will be very defensive," a Russia expert at the European Council on Foreign Relations, Andrew Wilson, told AFP.

Sweden's European Affairs Minister Cecilia Malmstrom said recently: "We welcome president Medvedev's comments on democracy and human rights but this has to be followed up with clear deeds, the situation of human rights in Russia is of great concern."

"We'd like to highlight recent events in north Caucasus where we've seen violence against human rights defenders, repression of minorities... also in Russia," she said.

Last year Sweden and Poland championed the setting up of an Eastern Partnership for the EU with six nations which Russia still considers to be within its sphere of influence: Armenia, Azerbaijan, Belarus, Georgia, Moldova and Ukraine.

Sweden Foreign Minister Carl Bildt has also upset Moscow with comments over its human rights record and its brief 2008 war in Georgia.

As a sign of the tensions, the Russians had appeared set at one stage to refuse to attend any summit in Stockholm, according to Swedish sources, preferring the more neutral Brussels.

The EU is also expected to ask Russia to clarify its intention to join the World Trade Organization.

#Energy #top bill at EU-Russia summit
You May Also like: