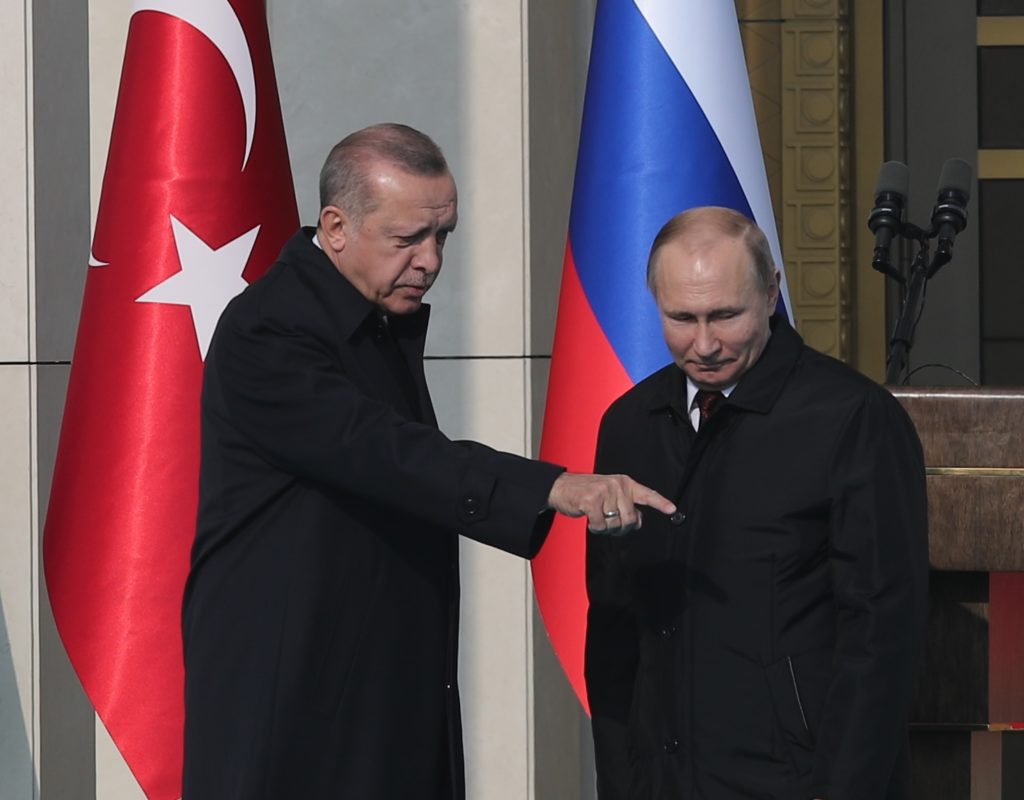 Turkish President Tayyip Erdogan and his Russian counterpart Vladimir Putin attend groundbreaking ceremony of the Akkuyu Nuclear Power Plant through videolink, at the Presidential Palace in Ankara, Turkey April 3, 2018. Photo: REUTERS
ANKARA: The leaders of Turkey and Russia marked the official start of work to build Turkey's first nuclear power plant on Tuesday, launching construction of the $20 billion Akkuyu power station in the southern province of Mersin. The plant will be built by Russian State Nuclear Energy Agency Rosatom and will be made up of four units each with a capacity of 1,200 megawatts. Russian President Vladimir Putin and Turkish President Tayyip Erdogan marked the official start to construction of Akkuyu's first unit, watching by videolink from the Turkish capital Ankara. "When all four units go online, the plant will meet 10 percent of Turkey's energy needs," Erdogan said, adding that despite delays Turkey still planned to start generating power at the first unit in 2023. The $20 billion, 4,800 megawatt (MW) plant, is part of Erdogan's "2023 vision" marking 100 years since the founding of modern Turkey and is intended to reduce Turkey's dependence on energy imports. However, since Russia was awarded the contract in 2010, the project has been beset by delays. Last month, sources familiar with the matter said Akkuyu was likely to miss its 2023 target start-up date, but Rosatom, which is looking for local partners to take a 49 percent stake in the project, said it is committed to the timetable. The Interfax news agency later cited the head of Rosatom saying that the sale of the 49 percent stake was likely to be postponed from this year until 2019. Turkish companies have been put off by the size of the financing required as well as by concerns they will not receive a sufficient share of the lucrative construction side of the deal, two industry sources have said. Putin is on a two-day visit to Turkey from Tuesday where he will meet Erdogan and Iranian President Hassan Rouhani for a summit on Syria.
#Erdogan #Putin mark formal start of work on Turkey's first nuclear power plant #Russian President Vladimir Putin and Turkish President Tayyip Erdogan
You May Also like: