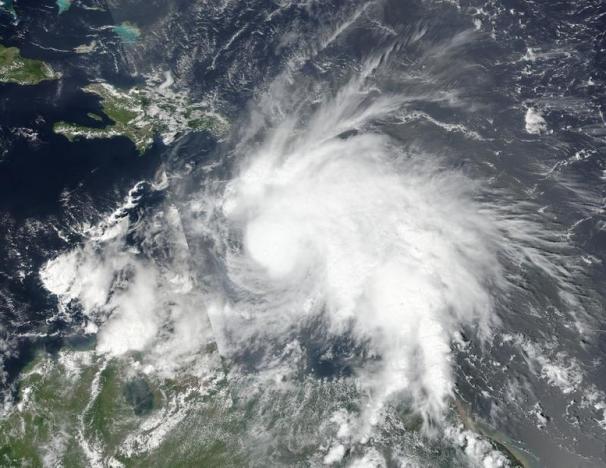 Tropical Storm Matthew, which has since gained hurricane strength, is seen in an image captured by NASA-NOAA's Suomi NPP satellite at 1pm ET (17:00 GMT) September 29, 2016.  REUTERS
KINGSTON: The United States prepared to airlift hundreds of people from its Guantanamo Bay naval base as the most powerful cyclone to form over the Atlantic since Hurricane Felix in 2007 ground slowly toward Jamaica, Haiti and Cuba. Haiti also began evacuating residents by boat from outlying islands in preparation for Hurricane Matthew, which threatens to wreak widespread damage in the region with flash floods and winds at about 150 miles per hour (240 kph). Matthew is expected to make landfall as a major storm on Jamaica's southern coast, home to the capital, Kingston, and its only oil refinery. Stormy weather could begin on Sunday. Simultaneously, the storm is forecast to lash southern Haiti, possibly dumping up to 40 inches (101 cm) of rain there and up to 25 inches (64 cm) in Jamaica, which could trigger life-threatening landslides and floods, the U.S. National Hurricane Center said. Albert Moulion, Haiti's interior ministry spokesman, said authorities had started voluntary evacuations of residents of small, exposed sandy islands in the south as a precaution. "We have already started evacuations," he said. "The national center of emergency operations has been activated." By early Tuesday, Matthew is due in eastern Cuba, with a path that could take it over the colonial city of Santiago de Cuba and Guantanamo province, where the US operates a naval base and a military prison. The US Navy said some 700 spouses and children were to be airlifted to Florida to wait out the storm. "The remaining military and civilian personnel will shelter in place and be able to support recovery efforts once safe to do so following the storm's passage," the Navy said in a statement. Later in the week, the storm could affect the Bahamas and the east coast of the United States, although forecasts so far out are often inaccurate. Florida's Governor Rick Scott said residents of the state should prepare for the storm. Cuban President Raul Castro visited Santiago de Cuba on Saturday to oversee preparations, Cuban TV footage showed. Matthew was about 360 miles (580 km) southeast of Port-Au-Prince on Saturday night and the US National Hurricane Center ranked it at Category 4 of the five-step Saffir-Simpson scale of hurricane intensity. Earlier it had been ranked at the top Category 5. The ferocity of the storm has led to concerns of economic devastation in the poor countries in its path. "The hurricane will cause an interruption, obviously, in our economic activities here," Jamaican Prime Minister Andrew Holness told Reuters in an interview on Saturday, saying that tourism and agriculture could be most affected. "We have allocated all the resources we can given our fiscal restraints and I think that the country is prepared for the hurricane," Holness said. Cash-strapped Jamaica has been suffering a long economic slowdown and is under an International Monetary Fund program to tackle high debt. The hurricane could affect tourist destinations such as Montego Bay in Jamaica's north In Kingston, residents stocked up on canned foods, water and flashlights in preparation for the storm, while banks and offices boarded up their windows. Fishermen were told not to go to sea. In MegaMart, a supermarket, Ennis St. Patrice bought big bottles of water. "We’ve had these kind of occurrences in the past and it is generally bad, because Jamaica does not have proper infrastructure," said the trade unionist for Jamaica's meteorological office. "In simple rainfall, we have flooding."
#United States #Cuba #Jamaica #Haiti #Guantanamo Bay #Hurricane Matthew
You May Also like: