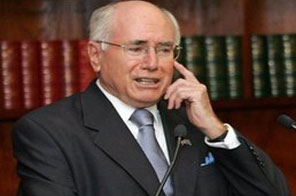 Former Australian Prime Minister John Howard (pictured in 2007) is in the running to take charge of international cricket, according to reports. Source: AFP

The Melbourne Age newspaper said Howard was a candidate to be president of the International Cricket Council, but Cricket Australia would not confirm whether it had nominated him for the position.

Howard, 70, who is a self-confessed 'cricket tragic,' also had no comment.

"He does not want to say anything about the rumours," a spokesman for the former prime minister said.

The governing cricket bodies in Australia and New Zealand will next month propose an Australasian candidate to take the leadership of the ICC from 2012. The chosen candidate will serve as ICC deputy president from the middle of this year.

Since his defeat at 2007 elections, Howard's only official position has been as director of the Bradman Foundation, his office said.

Howard was in the running last October for a senior position with Australia's National Rugby League.

A spokesman for Cricket Australia said an Australian candidate had been selected but would not say if it was Howard.

"We do have a preferred candidate. He is very dedicated to cricket and willing for his name to go forward," the spokesman said.

Howard has been a regular cricket watcher at Australian Test matches both here and overseas.

He was prime minister from March 1996 to December 2007 and was the second-longest serving Australian leader after Sir Robert Menzies.

#Ex Aussie PM linked to ICC top job
You May Also like: