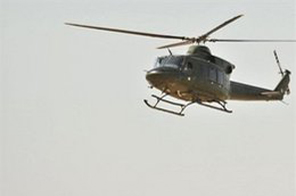 A helicopter hovers over a Pakistani soldier after the attack on the entrance of army headquarters in Rawalpindi on October 10. Source: AP

PESHAWAR: An explosion rocked a northwest Pakistani district next to the troubled Swat Valley on Monday, killing at least seven people, officials said.
Meanwhile, the Pakistani Taliban claimed responsibility for a weekend siege of the army's headquarters.
The explosion in Shangla district occurred at a market and may have been a car bombing, police official Tahir Khan said. An army vehicle was ablaze at the scene, witness Khalid Khan said.
It appeared to be the latest in a string of major attacks in Pakistan, underscoring militant strength ahead of an expected offensive in the main al-Qaida and Taliban stronghold of South Waziristan.
Shangla lies east of Swat, which has been the focus of an intense military offensive against the Taliban. The army says it has largely cleared the valley of the insurgents, though some were on the run. Many of the Taliban are believed to have melted into the rural areas or gone to neighboring districts.
Mayor Bakhte Alam put the official death toll so far at seven and said at least 15 people were wounded in Shangla's Alpuri area. It was not immediately clear whether the army vehicle was the target of an attack from another vehicle or whether a bomb exploded from within it.
The weekend siege of the powerful military's "Pentagon" in the Pakistani city of Rawalpindi was perhaps the most audacious of the attacks over the past week.
Taliban spokesman Azam Tariq called The Associated Press on Monday and said the attack that left 20 people dead was only the first in a planned series of strikes intended to avenge the killing of Pakistani Taliban chief Baitullah Mehsud in a CIA missile strike in August.
"This was our first small effort and a present to the Pakistani and American governments," he said.
He said the raid on army headquarters was carried out by a Punjabi faction of the militant group and it had given orders to other militant branches across the country to launch similar operations.
He also warned the army against launching the offensive into South Waziristan.