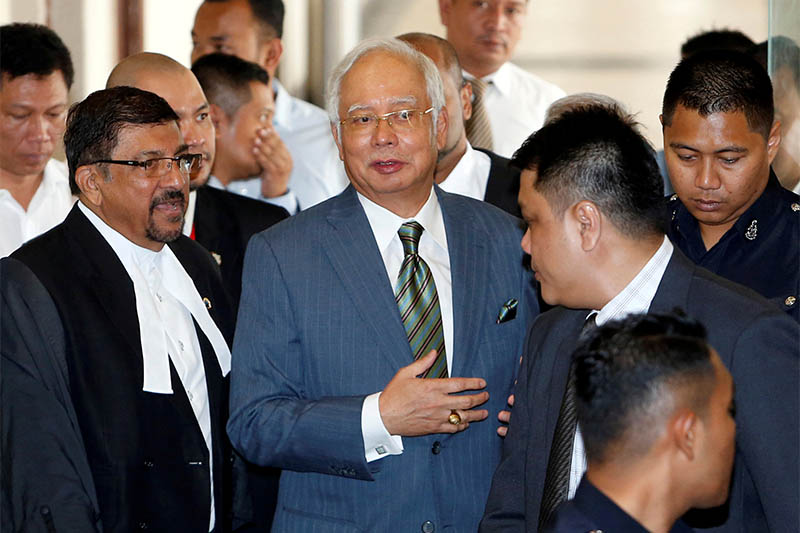 File: Malaysia's former prime minister Najib Razak walks out of a courtroom in Kuala Lumpur, Malaysia August 8, 2018. Photo: Reuters
KUALA LUMPUR: Malaysian prosecutors charged former Prime Minister Najib Razak with 21 counts of money laundering and four counts of abuse of power on Thursday over hundreds of millions of dollars received in his personal bank account. The charges bring the total number against Najib to 32 as investigators ramp up a probe into how billions went missing from scandal-plagued 1Malaysia Development Berhad (1MDB) - a state fund that he founded and chaired. Najib has denied all charges, which have piled up since he unexpectedly lost a general election in May to Mahathir Mohamad, who reopened the 1MDB investigation. Prosecutors, describing the abuse of power charges, said Najib used his position as prime minister, finance minister and chairman of 1MDB to obtain funds totalling about 2.3 billion ringgit ($556.23 million) between 2011 and 2014. The money-laundering charges describe how Najib received 2.1 billion ringgit from Tanore Finance Corp, which U.S. authorities have said was used to siphon money from 1MDB. "The charges made today will give me a chance to clear my name, that I am not a thief," Najib told reporters. He was released after the judge set bail of 3.5 million ringgit ($846,430), to be paid by Sept. 28. Prosecutors said it was a matter of "national disgrace" for a head of state to be facing such charges. "This is a case involving a man holding the highest elected office. And him, facing such serious charges, must face some consequences in the eyes of the court," lead prosecutor Gopal Sri Ram said, arguing for a bail amount of 5 million ringgit. Najib has faced corruption allegations since the Wall Street Journal reported in 2015 that $681 million was sent to a personal bank account of the then-prime minister in 2013. A year later, the US Department of Justice confirmed the transaction and said the funds originated from 1MDB. Najib has said the funds were donations from Saudi Arabia, most of which he returned. Despite growing calls to step down, he clung to power by cracking down on dissent and the media. But Malaysians voted him out earlier this year and he has since come under close scrutiny. In recent months, prosecutors brought a total of seven charges against Najib over 42 million ringgit that allegedly flowed from SRC International, a former 1MDB unit, into his bank account. The Department of Justice has said a total of $4.5 billion was stolen from 1MDB through a complex web of transactions and fraudulent shell companies. Malaysian financier Low Taek Jho is described as a central figure in the scandal. MORE CHARGES? Azam Baki, the deputy commissioner of the anti-graft agency, said more charges could be brought against individuals. When asked if Najib's wife, Rosmah Mansor, could face charges, he said: "I'm not denying that." Rosmah was questioned by investigators earlier this year and has been barred from leaving the country. Najib's lawyer, Muhammad Shafee Abdullah, described the charges against his client as "bizarre". "Can you be accused of money laundering for returning funds? It doesn't make sense," he said. Shafee himself was charged with money laundering last week after allegedly receiving 9.5 million ringgit from Najib. Both Malaysian and US authorities have described how Najib returned most of the money he received to the Tanore account he originally received the money from. However, US authorities have said Tanore was controlled by an associate of Low and held funds diverted from 1MDB.
#money-laundering #Najib Razak
You May Also like: