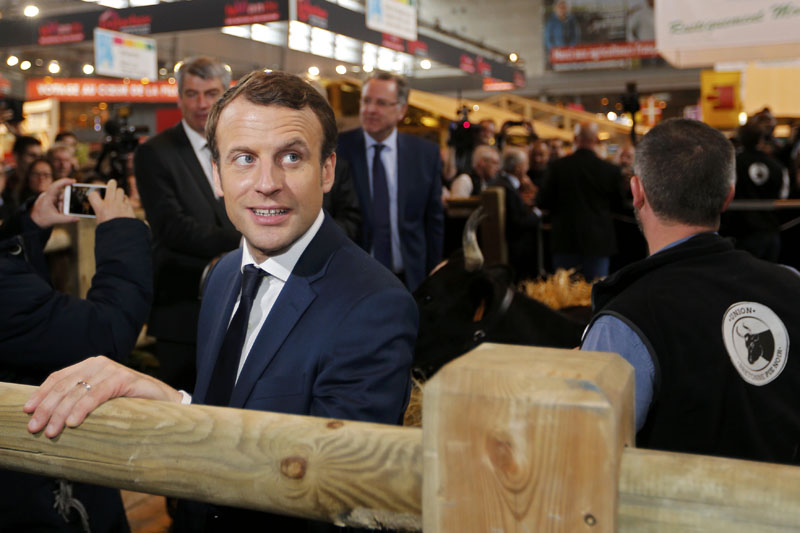 Emmanuel Macron, head of the political movement En Marche !, or Onwards !, and candidate for the 2017 French presidential election, visits the International Agricultural Show in Paris, France, on March 1, 2017. Photo: Reuters
PARIS:  French presidential frontrunner Emmanuel Macron said on Thursday he would ban lawmakers from employing family members and from carrying out consulting activities, seizing on his conservative rival's legal troubles to project a clean image. Standing as an independent centrist, Macron is tipped by opinion polls to defeat far-right leader Marine Le Pen in a run-off vote in May. He has shot to the position of frontrunner after conservative Francois Fillon was embroiled in a financial scandal over his wife's employment as a parliamentary assistant and summoned by a judge on Wednesday. In an interview with Le Parisien newspaper published on Thursday, Macron said if elected, he would pass a law to "moralise" French politics and fight conflicts of interest. "If we're for zero tolerance, it must be for everyone," Macron told the daily. "There can't be zero tolerance for young people from poor neighbouroods and indulgence towards the powerful and white-collar fraud," he said. The 39-year old is set to unveil his full manifesto at a news conference in Paris later on Thursday. Last week, the former economy minister outlined a broad economic plan mixing tax cuts, a reduction in government jobs and higher investments as well as a pledge to keep France's budget deficit below 3 percent of economic output. Macron resigned from President Francois Hollande's Socialist government last August. He has built up his own party machine and attracted endorsements from both the left and right of the political spectrum. In the Le Parisien interview, Macron also said he would seek to smooth out differences between France's 37 pension systems, would penalise companies using too many short-term contracts, and ban mobile phones in primary and secondary schools.
#Marine Le Pen #Emmanuel Macron #French presidential election #Francois Fillon #En Marche #Onwards
You May Also like: