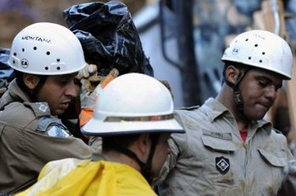 Firefighter remove the body of a victim of a landslide in Prazeres shantytown in Rio de Janeiro, Brazil. Another devastating mudslide crushed dozens of homes in the Rio de Janeiro area as rescuers searched Thursday for survivors of floods and landslides that have claimed the lives of at least 148 people after the worst rains in half a century. Source: AFP

RIO DE JANEIRO: Another devastating mudslide crushed dozens of homes in the Rio de Janeiro area as rescuers searched Thursday for survivors of floods and landslides that have claimed the lives of at least 148 people after the worst rains in half a century.

As many as 45 houses were swept away by the latest mudslide in the hard-hit city Niteroi Wednesday night, firefighters told Globo television network, adding that some 60 people were believed to be inside th doomed buildings at the time.

As of midnight, 20 people had been pulled from the rubble alive but three were dead, authorities said.

"We heard a huge noise and when we turned around everything had come down," a resident of the hillside favela told the Globo cable news station.

Civil Defense officials late Wednesday said that 145 people were confirmed dead -- not counting the latest victims in Niteroi, a city across the bay from the state capital and part of the greater Rio de Janeiro metropolitan area.

Globo said rescuers eventually asked the helicopter to leave so they could listen for sounds from buried survivors.

The toll was likely to rise further as dozens of people were reportedly still missing following the rains, which displaced more than 1,400 people and destroyed scores of homes.

Flooding over the past days has been so intense that authorities urged area residents to remain indoors.

Heavy rain, which began on Monday, fell intermittently on Wednesday amid sunny spells, providing hope that the worst was over.

Emergency officials said most fatalities were in hillside slums around the city of Rio de Janeiro, where torrents of water triggered devastating mudslides and scenes of chaos.

Trash, stones and rubble dotted the muddy hills of Niteroi on Wednesday, alongside precarious homes.

"People have nowhere to go, they're all doomed," Vinicius Gomes, the cousin of a landslide victim, told AFP.

"Our aim now is to save lives. Of course we'll have to remove houses from risk areas in Niteroi," local mayor Jorge Silveira told journalists.

But the authorities were blasted in the press for a failure to anticipate the disaster.

"Where is the emergency plan?" was the headline in O Globo.

"The tragedies of the rains in Rio have been repeated over 40 years and the authorities do not react," the newspaper said.

Most of the casualties were trapped in landslides in the slums around Rio, a city of some 16 million people that will host the World Cup football tournament in 2014 and the 2016 Summer Olympics.

Many sports grounds and gymnasia were flooded, including the famous Maracana stadium.

The situation "is better than it was yesterday," Rio de Janeiro Mayor Eduardo Paes told a news conference, speaking before the Niteroi landslide.

The killer floods wreaked havoc with air traffic, delaying most international flights in and out of Rio's Antonio Carlos Jobim airport and forcing the cancellation of many domestic services.

Brazil had already seen deadly deluges in Sao Paulo earlier this year after the wettest summer in the region in more than six decades.

#Fresh mudslide as Brazil death toll tops 145
You May Also like: