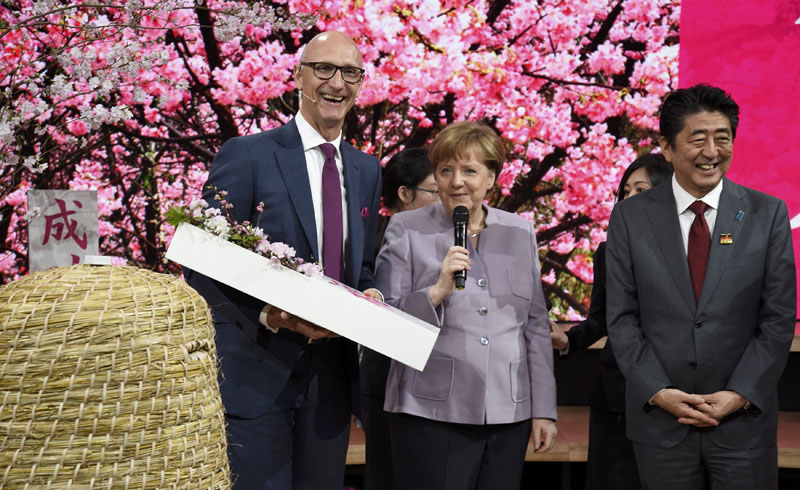 Japanese Prime Minister Shinzo Abe and German Chancellor Angela Merkel at the Deutsche Telekom booth with CEO Timotheus Hoettges during a media tour of the world's biggest computer and software fair, CeBit, in Hanover, Germany, March 20, 2017. Photo: Reuters
HANOVER:  German Chancellor Angela Merkel and Japan's Prime Minister Shinzo Abe spoke up for free trade at a major technology fair on Sunday with jabs clearly pointed at an increasingly protectionist United States.
Both called for a free trade deal to be reached quickly between Japan and the European Union, in comments made after G20 finance ministers and central bankers dropped a long-standing mention of open trade in their final communique after a two-day meeting in Germany. Neither leader named the US government as they opened the CeBIT technology fair in Hanover, but both used the opportunity to distance themselves from protectionist tendencies coming from the Trump administration. "In times when we have to argue with many about free trade, open borders and democratic values, it's a good sign that Japan and Germany no longer argue about this but rather are seeking to shape the future in a way that benefits people," Merkel said. As G20 president, Germany feels especially committed to these principles, she added. After meeting President Donald Trump in Washington on Friday for the first time, Merkel said she hoped the United States and the European Union could resume discussions on a trade agreement. Trump said he did not believe in isolationism but that trade policy should be fairer. Merkel stressed that Germany was strongly in favour of free trade and open markets. "We certainly don't want any barriers but at a time of an 'Internet of things' we want to link our societies with one another and let them deal fairly with one another, and that is what free trade is all about," she said. Speaking at the same event, Abe said: "Japan, having gone through reaping in abundance the benefits of free trade and investment, wants to be the champion upholding open systems alongside Germany." He added: "Of course to do so it will be necessary to have rules that are fair and can stand up to democratic appraisal." He also said the European Union and Japan should soon reach an economic deal. Merkel welcomed his comments, saying: "It's very, very good that Japan says we want a free trade agreement, we want it soon because that could be the right statement and Germany would love to be a driving force behind this." European Commission President Jean-Claude Juncker told Bild am Sonntag newspaper he was pleased that he would be meeting Abe on Tuesday and said the bloc wanted to conclude a free trade deal with Japan this year.
#European Commission #Shinzo Abe #Angela Merkel #G20 #Japan-Germany relations #Japan-EU relations #CeBIT technology fair
You May Also like: