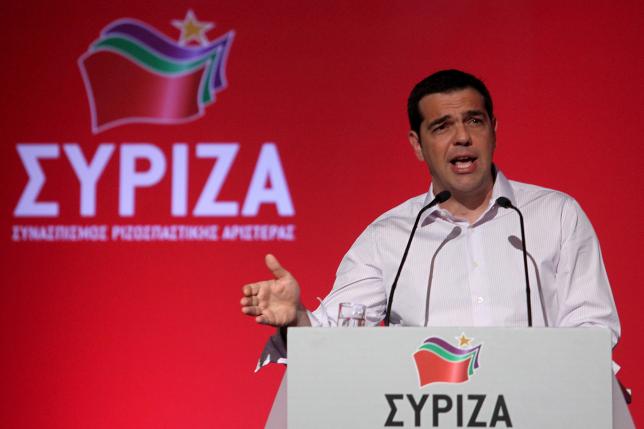 Greek Prime Minister Alexis Tsipras gestures as he delivers his speech during a central committee of leftist Syriza party in Athens, July 30, 2015. REUTERS
ATHENS: Greece's ruling Syriza movement backed a call on Thursday from Prime Minister Alexis Tsipras to hold an emergency party congress as he seeks to assert his control over rebel lawmakers balking at new bailout talks. At a meeting of the Syriza movement's 200-member central committee held in an old cinema hall, Tsipras defended his decision to accept harsh bailout terms as the best deal anyone could win for Greece. He threw down the gauntlet before his critics by proposing an immediate membership ballot on the bailout negotiation, but said his preference was for Syriza to hold an emergency congress in September to deliberate strategy. After hours of debate, the committee backed his proposal in a show of hands. The emergency congress will allow Tsipras to bring in new members and capitalise on the wider public support he has secured over the past two years, making it easier to defeat the far-left camp. "We are telling the Greek people, loud and clear and with no remorse, that this is the deal we managed to bring to them and if there is someone who thinks that they could have achieved a better deal, let them come out and say that," he told the session that included dissenters like parliament speaker Zoe Konstantopoulou. Greece narrowly averted an exit from the euro zone when it struck an 11th-hour deal with lenders this month, but that cost Tsipras the support of a quarter of his lawmakers who accuse the party of betraying its anti-austerity roots. DEEPENING CRISIS The deepening crisis within Syriza is the most serious political challenge to Tsipras, who otherwise enjoys unrivalled domination of Greek politics and remains popular despite his sudden U-turn to accept stringent bailout terms. Failure to quash the far-left revolt could plunge Greece back into turmoil and risk derailing talks now quietly underway in Athens with the European Central Bank, International Monetary Fund and the euro zone's rescue fund on a new 86 billion euro loan package. In another potential setback for the talks, the Financial Times reported that IMF staff had recommended to the Fund's executive board that it should not take part for now in a third bailout because of Greece's poor compliance record and the unsustainable level of its debt. Only if Athens improved its track record of implementing reforms and its euro zone partners agreed to a substantial debt restructuring would the IMF consider joining the programme at a later stage, the FT reported, citing a confidential summary of a board meeting held on Wednesday in Washington, D.C. An IMF official said the Fund would approve new loans for Greece only if Athens reached a deal with European governments that would ensure it can pay its debts, and there was "no expectation" that talks over the next couple of weeks would get to the point where the Fund could approve a new programme. Greek Finance Minister Euclid Tsakalotos is due to hold his first meeting with senior representatives of the country's creditors, including the IMF, in Athens on Friday. Germany, Greece's biggest creditor, has insisted on IMF participation in any further aid programme. DAMAGED RELATIONSHIP As the all-day Syriza meeting proceeded in a rare public session, party officials spoke openly of a widening rift between those who want the country to stay in the euro area despite painful sacrifices, and leftists who would prefer a return to the drachma currency. "At the moment there are two different strategies competing in the same party: one that wants Greece inside the euro and the other that wants Greece outside euro," Olga Gerovasili, the government spokeswoman told reporters as she arrived. "These two can't exist together at the government level." Deputy Prime Minister Yiannis Dragasakis said the hardliners were behaving like a party-within-the-party and suggested the time may have come to part ways. "You reap what you sow and I hope that we are heading for the refoundation of a new party." While most speakers criticised the bailout and government actions, many said the left should move on and not waste the historic opportunity of being in power. But Left Platform leader Panagiotis Lafazanis said the bailout deal betrayed the party's principles. "Syriza is at risk of humiliation because of the bailout transformation," he told the meeting. "In this country there is no democracy ... but the dictatorship of the euro." Left Platform is demanding Syriza abandon talks with lenders immediately and had proposed an ordinary party congress to determine the party's course. A regular congress would have favoured the far-left, with the same members who attended two years ago returning to vote on Syriza's future. Forced to rely on opposition support in parliament to pass austerity and reform packages, Tsipras is widely expected to call early elections to consolidate his grip on the party once he has agreed the third bailout package with lenders. His government wants to wrap up negotiations with lenders on that package in time for a major debt payment due on August 20, before moving on to sorting out his party's troubles. "Our priority is the (bailout) deal," Gerovasili said. "After this we can deal with party issues."
#Greece #congress vote
You May Also like: