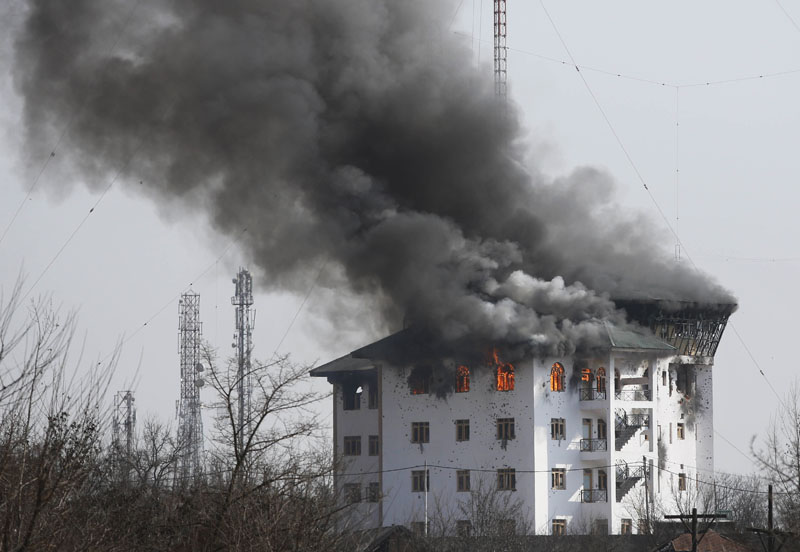 Smoke billows from a building where suspected militants have taken refuge during a gun battle in Pampore, near Srinagar, Indian controlled Kashmir, Indian-controlled Kashmir, on Monday, February 22, 2016. Photo: AP
SRINAGAR: Loud explosions and gunfire rattled a building where a few Kashmiri rebels were fighting off Indian government forces for a third day Monday in a standoff in which five soldiers and one civilian have been killed. Two to three rebels have been cornered in a small area of the five-story government building, paramilitary officer Nalin Prabhat said. The militants took refuge there after they fired automatic rifles and ambushed a convoy of paramilitary soldiers Saturday. The rebels allowed more than 100 civilian government employees to leave the building without any harm. Anti-India sentiment runs deep in India's portion of Kashmir, where rebel groups have been fighting since 1989 for either independence or a merger with neighboring Pakistan. More than 68,000 people have been killed in the armed uprising and ensuing Indian military crackdown. Two army captains and a special forces soldier were killed Sunday after two paramilitary soldiers and one civilian were killed Saturday. Another 13 paramilitary troops have been wounded in the standoff. "Our main purpose is to make sure that we don't have any more casualties," Lt. Gen. Satish Kumar Dua, India's top army officer in Kashmir, said on Monday. "There's no hurry. We will take as long as it takes," Dua said, adding that special forces have to clear the five-story building room by room. As an intense gunbattle raged between security forces and the insurgents, a portion of the building caught fire on Sunday, but the blaze subsided after some time. The army also flew a drone to monitor the rebel positions. Meanwhile, hundreds of residents in the Pampore area, where the militants are holed up, came out on the streets for a second day Monday in a show of support for the rebels, chanting slogans against Indian rule in Kashmir. They ignored government orders to stay away from the site of the gunbattle. India and Pakistan each administer a portion of Kashmir, but both claim the Himalayan region in its entirety. The rival nations have fought three wars, two of them over control of Kashmir, since they won independence from British colonialists in 1947.
#Kashmir #Kashmir rebel attacks #anti-India sentiment #Indian government forces
You May Also like: