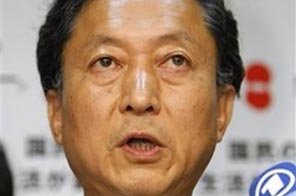 TOKYO: Japan's likely next prime minister met with senior party leaders Tuesday to discuss a new Cabinet, expected to include a new post to oversee strategy to bring the country out of its worst economic downturn since World War II.
Diplomacy, particularly relations with top ally Washington, also was expected to be one of Yukio Hatoyama's top priorities.
Hatoyama's Democratic Party of Japan won a landslide victory in parliamentary elections over the weekend, and he has moved quickly to prepare a coalition with smaller allies and meet with top leaders of his own party to assure a smooth transition.
Hatoyama is to be formally installed as prime minister, replacing the Liberal Democrats' Taro Aso, in a special session of parliament sometime in the next few weeks.
His Democrats soundly defeated the Liberal Democratic Party, which has been in power for virtually all of the past 54 years, and now face severe problems centered on rebuilding the world's second-largest economy and dealing with record-high unemployment.
One of Hatoyama's first moves will be to create a Cabinet post to oversee fiscal policy and other top national strategy issues, the daily Yomiuri and other media reported. He is also expected to name one of the party's most senior members to take the finance minister portfolio.
Hatoyama did not speak with reporters Tuesday, and party officials had no immediate comment.
After being elected, Hatoyama is expected to travel to New York to attend a session of the United Nations, and U.S. Defense Secretary Robert Gates is scheduled to visit Tokyo in October to discuss the U.S.-Japan military alliance.
Hatoyama's Democrats have said they want to bring a more independent stance to Japan that places more emphasis on relations with its Asian neighbors, while keeping U.S. relations as a cornerstone of their global policy.
The United States has about 50,000 troops deployed across Japan under a mutual security pact. The governments are negotiating an arrangement to move some 8,000 Marines from the southern Japan island of Okinawa to the tiny U.S. territory of Guam in the Pacific Ocean.
The move has been complicated by the related issue of moving an air station now located in the crowded Okinawan city of Futenma. Washington wants the facility to be replaced with another airfield on Okinawa, but that plan has met with tough local opposition.
Hatoyama's party has been vague on what it intends to do about the base, but Washington has insisted it must be replaced soon under existing plans.
"The United States has no intention to renegotiate the Futenma replacement facility plan or Guam relocation with the government of Japan," State Department spokesman Ian Kelly said Monday.

#Hatoyama vows to improve economy
You May Also like: