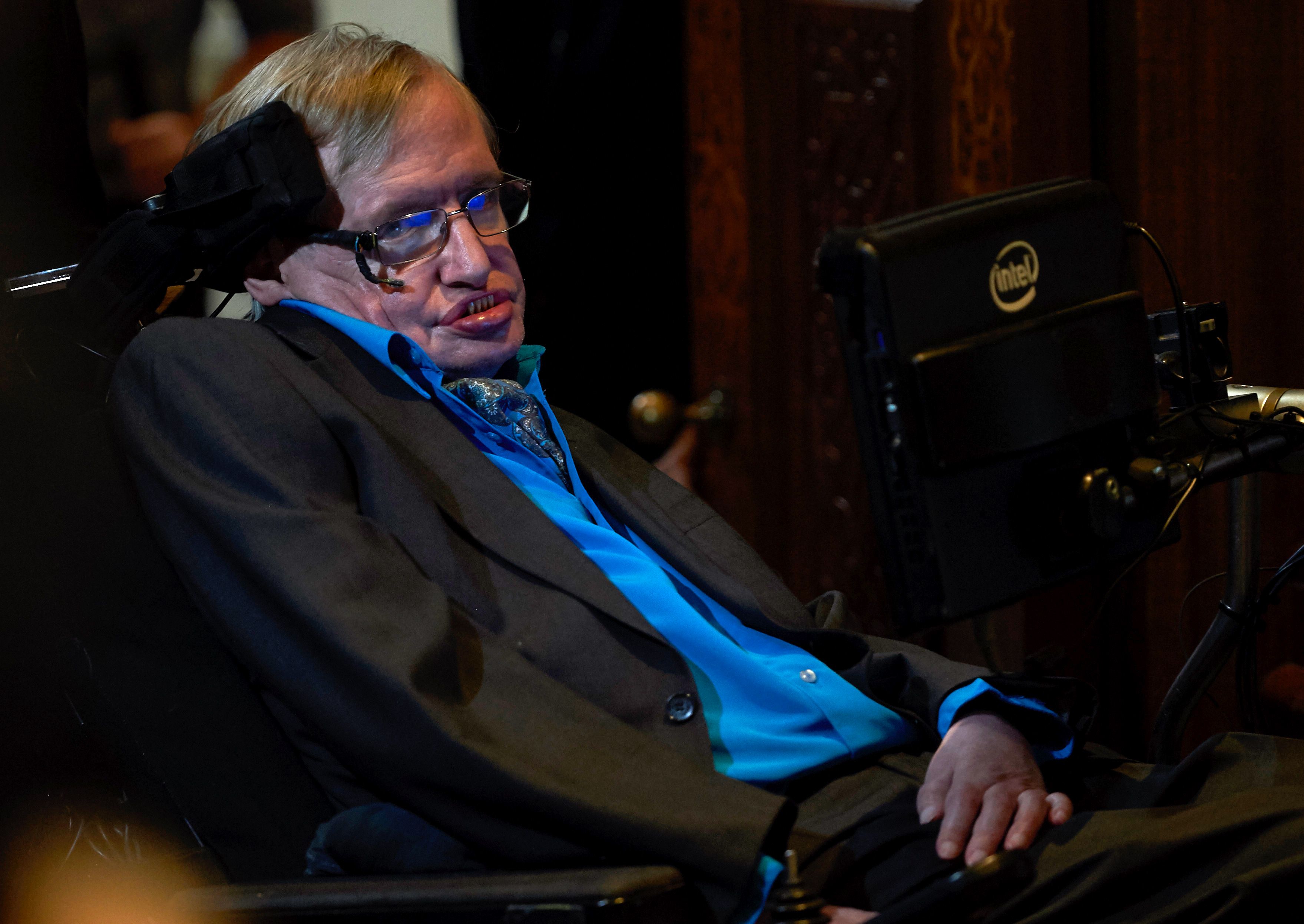 British scientist Stephen Hawking attends a press conference in London on July 20, 2015, where he and Russian entrepreneur and co-founder of the Breakthrough Prize, Yuri Milner, annouced the launch of Breakthrough Initiative, a new project to attempt to detect life in the Cosmos. Photo: AFP
London, July 21 British cosmologist Stephen Hawking yesterday launched the biggest-ever search for intelligent extraterrestrial life in a 10-year, $100-million project to scan the heavens. Russian Silicon Valley entrepreneur Yuri Milner, who is funding the Breakthrough Listen initiative, said it would be the most intensive scientific search ever undertaken for signs of extra-terrestrial intelligent life. “In an infinite universe, there must be other occurrences of life. Somewhere in the cosmos, perhaps, intelligent life may be watching,” Hawking said at the launch event at the Royal Society science academy in London. “Either way, there is no bigger question. It’s time to commit to finding the answer, to search for life beyond Earth. We must know.” The project will use some of the biggest telescopes on Earth, searching far deeper into the universe than before for radio spectrum and laser signals. “We are launching the most comprehensive search programme ever,” said Milner.“Breakthrough Listen takes the search for intelligent life in the universe to a completely new level.” He said the scan would collect more data in one day than a year of any previous search, tracking the million closest stars, the centre of the Milky Way and the 100 closest galaxies. “We should not read too much into the lack of confirmed signals,” said the former physics student, who is named after Yuri Gagarin, the first man in outer space. Earth’s telescopes would be able to detect a signal from similarly-advanced technology sent from the centre of the Milky Way. A signal from Andromeda, the nearest major galaxy, would need only the power of two times the Three Gorges Dam in China to reach Earth. “We don’t need to assume that civilisation is way more developed than we are,” Milner said. Martin Rees, Britain’s astronomer royal and one of the project leaders, said modern technology allowed much more sensitive searches than ever before, though he cautioned against expectations of finding intelligent alien life. “It’s a huge gamble, of course, but the pay-off would be so colossal... even if the chance of success is small,” the astrophysicist said. However, the possibility of finding life had effectively risen a billionfold through the identification of billions of Earth-like planets in the Milky Way, he said. “Is there life out there? We may not answer it but this gives a bigger chance that it may be answered in our lifetime,” he said. The programme will be 50 times more sensitive than previous searches, and cover 10 times more of the sky, experts said. It will scan at least five times more of the radio spectrum, and 100 times faster, while in tandem undertake the deepest and broadest-ever search for optical laser transmissions. The initiative was launched on the 46th anniversary of the first manned Moon landing. It is allied with the Breakthrough Message project, an international competition to create digital messages that represent humanity. There is no commitment to send any messages into space, and the project should spark discussion about whether humans should be sending messages at all out into the void.
#Stephen Hawking #cosmologist #extraterrestrial life #Silicon Valley #biggest telescopes #Andromeda #Milky Way
You May Also like: