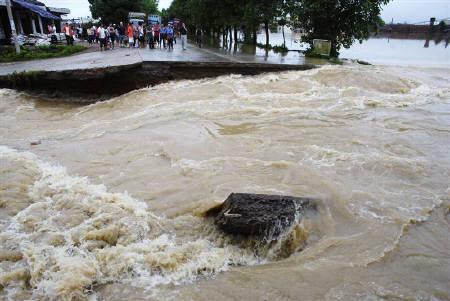 A road damaged by floods is seen in Yujiang county, Jiangxi province June 20, 2010. Floods and landslides across southern China have killed at least 88 people and left 48 missing in a week, Xinhua news agency said.
Reuters
BEIJING: Four days of heavy rain have caused severe flooding in central China, killing at least 15 people and leaving 19 others missing. China's Ministry of Civil Affairs said Tuesday that the 15 people died from drowning, mudslides and house collapses. It said up to 51.4 centimeters (20 inches) of rain fell in the eastern province of Jiangsu from Friday to Monday and that water levels of rivers and lakes were dangerously high in a six-province region. The ministry said millions of people have been affected by the heavy rains since Friday.
#China #heavy rainfall #Ministry of Civil Affairs
You May Also like: