HONG KONG: Nearly six months of anti-government protests are set to thrust Hong Kong's lowest-tier of government onto the international stage on Sunday with elections that will be a test of support for the embattled administration of Chief Executive Carrie Lam. 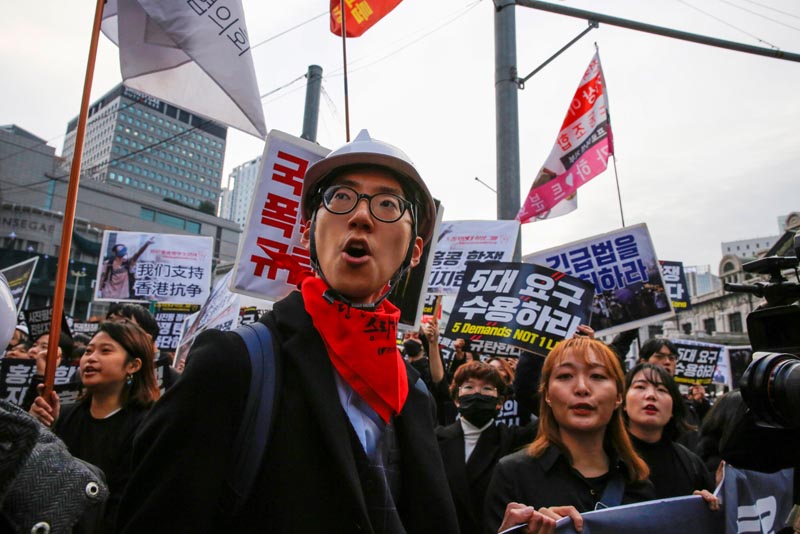 Pro-establishment parties dominate Hong Kong's 18 district councils, which function as advisory bodies and control local spending. With a record number of candidates, this year will be the first time that all 452 seats are contested.

The rural district of Yuen Long near the Chinese border has traditionally been a pro-establishment stronghold. But having experienced months of demonstrations and some of the most violent unrest, the balance of power in the 45-seat council is likely to face a severe test on Sunday.

"District council is not that powerful, but it is not totally powerless," said Tommy Cheung, a pan-democratic candidate for Yuen Long who is a former student leader of the "Umbrella Movement" pro-democracy protests of 2014 that paralysed parts of the financial centre for 79 days.

Cheung, 25, runs a business that trades agricultural products and had planned to study abroad until an attack in Yuen Long on July 21 made him change his mind.

That night, more than 100 white-shirted men beat black-clad anti-government protesters and commuters in Yuen Long train station. The incident left protesters seething at what they felt was a lack of prompt police action to intervene and protect those bloodied by the suspected triad gangsters.

Angered by the assault, Cheung – who grew up and lives in the nearby district of Tuen Mun – decided to run for office in Yuen Long and vows to launch an investigation into the attack.

Cheung said that while district councillors must tend to neighbourhood matters, it would be inappropriate to focus solely on local issues given the simmering, often violent, protests that have shaken the China-ruled city.

"Political factors will be much more important than the community issues," said Cheung. But in Yuen Long, "July 21 is not only a political issue – it's also a community issue."

"My residents and voters want change."

Gripping a walking stick because his feet were swollen from canvassing, Cheung added: "I don’t think the movement will end in the short term. The movement will go on for years."

Underlining the added significance of the district elections, a record 4.1 million people out of a population of 7.4 million have registered to vote, in part a result of registration campaigns during the protests.

The months of protests started over a bill that would have allowed people to be sent to China for trial. Although it was later withdrawn, the protests had evolved into calls for full democracy in a major challenge to Chinese President Xi Jinping.

Hong Kong returned from British to Chinese rule in 1997 with the promised protection of many of its colonial freedoms under "one country, two systems" for at least 50 years.

If the pro-democracy campaigners gain control of the district councils in Sunday's vote, they could secure six seats on the city's Legislative Council, or parliament, and 117 seats on the 1,200-member committee that selects Hong Kong's chief executive.

Although pro-democracy campaigners expect to gain votes, Ivan Choy, a senior lecturer on electoral politics at the Chinese University of Hong Kong, said the camp may not have the support of many moderate voters.

"If the district council elections had been conducted in May, June, or July, I think the democrats would have had a landslide victory," said Choy.

"After five months ... I'm worried that there will be some backfire from the moderate voters who want to restore order."

Choy said Yuen Long would be a litmus test for democratic support.

"It has been long dominated by conservative and rural forces," Choy said. "If the democrats can get more seats in Yuen Long district, it would mean the support of the movement and the sentiment against the July 21 incident are very strong."

Jason Chong, a 28-year-old candidate from the Democratic Alliance for the Betterment and Progress of Hong Kong – the territory's largest pro-Beijing party – said he is eager to improve quality of life in his hometown.

With three years experience as a community officer for his political party, and advice from his father – a former district councillor – Chong is familiar with the role and said this election is "a totally different game," likening candidates during the protests to doctors serving in war zones.

"Before the war, you're just doing normal jobs. But during the war, you have to do a lot more – there's a lot more patients coming in. I think it's a little bit similar in politics," Chong said.

One problem he wants to address is young people's disillusionment with the government and fears for their future.

"You have to listen to what they say," Chong said. "If not, we're going to lose them. They may leave Hong Kong, or they may do something stupid that they may regret afterwards and end up in jail."

Cheung Chor-yung, a political scientist at City University in Hong Kong, believes the pro-democracy camp will fare well if there is a high voter turnout.

"If the opposition network can really penetrate every district, this is a kind of political force that you cannot ignore, whether you are in the government or Beijing," he said.

"If they can sustain the community work after the election, it could be a kind of fundamental change."