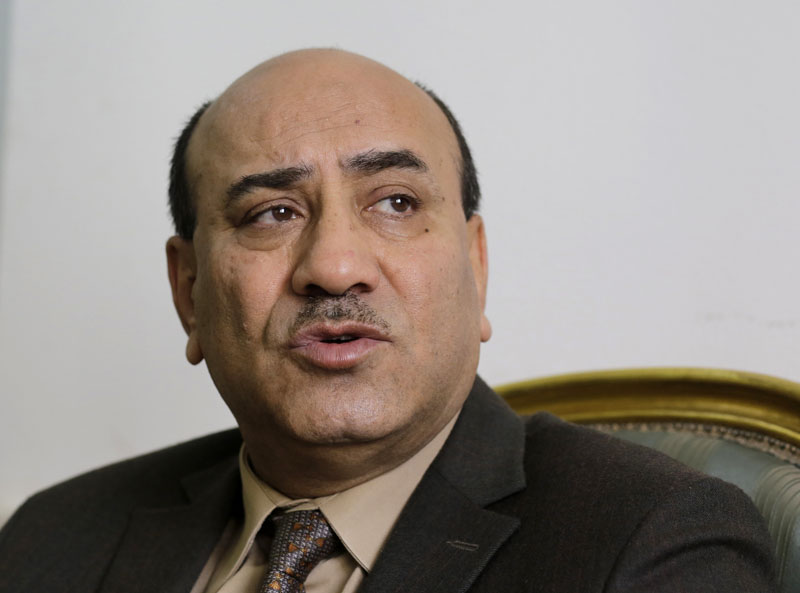 FILE - In this April 16, 2014 file photo, Hesham Genena, then head of Egypt's oversight body, speaks during an interview with the Associated Press at his office in Cairo. Photo: AP
CAIRO: Human Rights Watch said on Tuesday that the dismissal by Egypt's president of the country's top anti-graft official and his subsequent conviction for "disseminating false news" violated free speech and set a dangerous precedent. Hesham Genena was convicted last month over a report he issued claiming that corruption has cost Egypt 600 billion pounds ($67.6 billion). He escaped going to jail by paying a fine. He has appealed the verdict. A pro-government daily quoted him in December as saying the figure referred to money lost in 2015, but Genena later said he was misquoted and clarified that the figure covered four years. President Abdel-Fattah el-Sissi fired him in March after an investigation panel he appointed concluded he had misled the public. Egypt has heightened abuse of free speech "to the point of turning a misunderstanding into criminal charges punishable by prison," HRW's Nadim Houry said in a statement. "This escalation can have a dangerous chilling effect, especially on officials responsible for reporting corruption." On the eve of his dismissal, Genena was the only member of el-Sissi's administration appointed by Mohammed Morsi, an Islamist president ousted by the military in July 2013 after one year in office. Genena had long been the target of criticism from pro-government media under el-Sissi. However, his corruption expose sparked a particular furor, with media branding him a traitor and closet supporter of the outlawed Muslim Brotherhood, the Islamist group from which Morsi hails. Genena's trial was the latest manifestation of el-Sissi's broad clampdown on dissent, even inside his own government. Genena's daughter was also caught up in the retribution — el-Sissi signed off on her dismissal from her job as an aide in the administrative prosecution, effective last June. If el-Sissi "is serious about fighting corruption within Egypt, as he has said time and again, he should empower the regulatory agencies charged with investigating graft instead of single-handedly weakening the autonomy they depend on," Houry of HRW said. "Protecting the independence of anti-corruption organisations and their officials protects the freedoms and rights of Egyptians."
#Human rights #Egypt #islamist #freedoms
You May Also like: