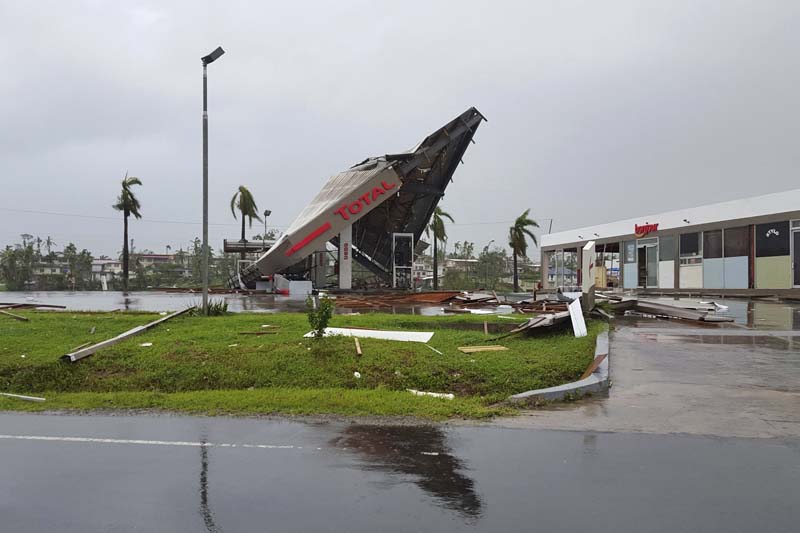 Bylinea service station lays in ruin after Cyclone Winston swept through the town of Ba on Fiji's Viti Levu Island, on February 21, 2016. Photo: Reuters
SYDNEY: Fijian officials were assessing the damage on Sunday after one of the most powerful storms recorded in the southern hemisphere tore through the archipelago, with early reports of widespread devastation in remote villages and one confirmed death. Reports from the ground said entire villages had been wiped out by Cyclone Winston, a Category 5 tropical cyclone that packed winds of 230 kph (143 mph), with gusts of up to 325 kph (202 mph). The storm hit Fiji late on Saturday, having changed direction at the last minute to spare the capital Suva the full force of its winds. "Some villages have reported that all homes have been destroyed," Jone Tuiipelehaki of the United Nations Development Program tweeted late on Saturday. "50 homes have been reported destroyed in the Navaga village in Koro Island." Australian Foreign Minister Julie Bishop said she had offered to send a P-3 Orion aircraft to carry out aerial surveillance of the outer-lying islands. "At this stage, I believe, the Fijian Government is coming to terms with the damage," Bishop told the Australian Broadcasting Corp. Fijian authorities confirmed that an elderly man had died on Koro Island when a roof fell on him. Power, water and communications services were cut across much of the country of almost 900,000 people and a nationwide curfew imposed by Prime Minister Frank Bainimarama on Saturday evening remained in place. Alice Clements, an official with UNICEF based in Suva, said she was extremely concerned about people in remote locations of the archipelago, which comprises around 300 islands. "The images that we're starting to see roll in are terrifying," she told Reuters by telephone, describing visuals of flattened houses, a car on the roof of a building and a small plane nose down in debris. Clements said she was concerned about the hundreds of people who live in low-lying river areas in tin sheds, cultivating crops in their backyard for subsistence and sale at the market. The government declared a 30-day state of emergency, including school closures for at least a week, amid concerns of flash flooding and mudslides. People had flocked to 758 evacuation centres on Saturday, while tourists in resorts along coast hunkered down in hotel ballrooms and conference rooms. "We had a pretty hairy night here with the wind and the rain and we weren't even in the direct pathway of the cyclone," Anna Cowley, CARE Australia's Pacific Gender Advisor in Suva told Reuters. "I can't imagine what it was like for the people up the northern end of the island where the cyclone made landfall." The United Nations Office for the Coordination of Humanitarian Affairs (OCHA) said it had an emergency response team on standby, but that Bainimarama had not yet asked for help. The airlines Virgin and Jetstar on Saturday suspended flights into and out of Fiji's international airport, while the national carrier suspended all flights. Fiji is a popular tourism destination for Australians, with around 340,000 people visiting each year.
#United Nations Office for the Coordination of Humanitarian Affairs (OCHA) #Fiji #Australian Foreign Minister Julie Bishop #Cyclone Winston #United Nations Development Program (UNDP)
You May Also like: